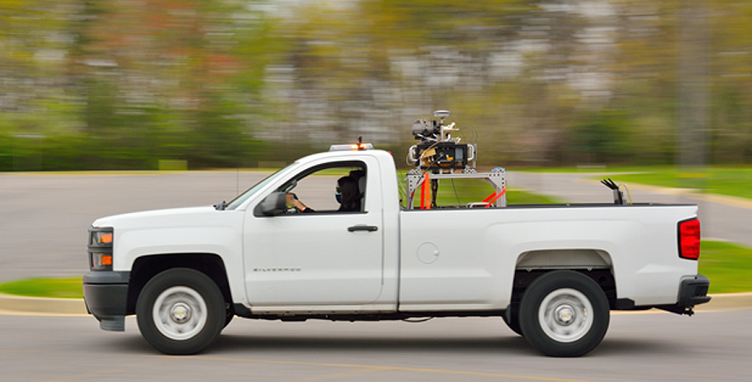 The SPLICE HDL system mounted to a pickup to test how it maps the surrounding areas. Source: NASA

NASA is testing a new 3D imaging system that will eventually be used on space missions to the moon, Mars and other terrestrial destinations.

Called Safe and Precise Landing — Integrated Capabilities Evolution (SPLICE), the technology will be used to help spacecraft as it descends and lands, scanning the landscape for a clear touchdown site.

NASA tested the system by loading it onto the back of a bed on a pickup truck strapped to a metal rig. As the pickup drove, the HDL system collected 3D images of buildings about 500 feet away. The system could collect data at multiple vehicle speeds and approach angles as well as several range measurements from lidar to the ground.

“Each data point collected is an individual range measurement,” said Ron Sostaric, project manager of SPLICE for NASA. “It can collect 16 million data points in just two seconds, and each range measurement is accurate to about one centimeter.”

The lidar system could be used in future moon missions, using SPLICE’s algorithms and sensors to target landing sites that weren’t possible during the Apollo missions where such regions had hazardous boulders and shadowed craters. It could also help land humans on Mars.

NASA said it is testing the technology on Earth to ensure HDL is ready for potential use by future lunar and planetary landers.