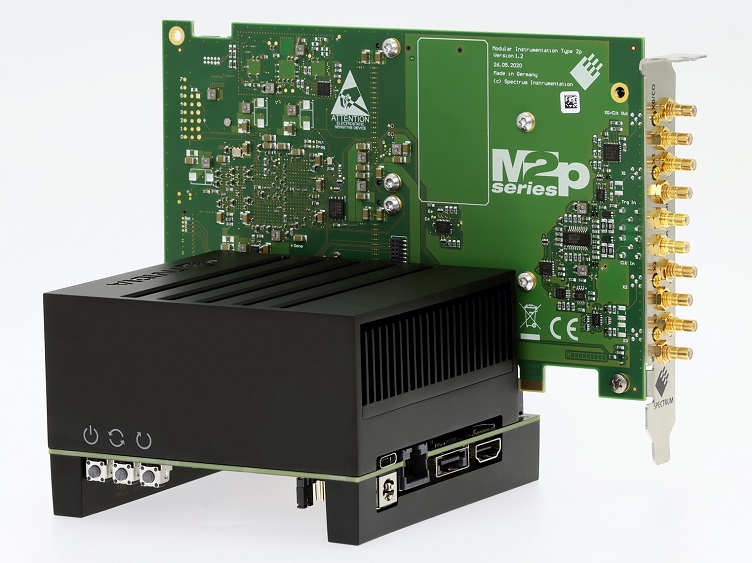 The NVIDIA Jetson is shown alongside a Spectrum digitizer card, as a small but powerful combination able to sample eight signals in parallel with 125 MS/s. Source: Spectrum Instrumentation

NVIDIA Jetson is a series of embedded computing boards found in onboard mobile platforms including autonomous robots, drones, handheld medical devices, intelligent vehicles and smart appliances. Applications such as these require acquisition, generation and analysis of fast analog and digital signals, and PC instrumentation developer Spectrum Instrumentation has responded with driver support.

The move follows a number of customer requests, according to Spectrum, and means that any of its high-performance digitizers, arbitrary waveform generators (AWGs) or digital I/O products with PCIe interface — currently 65 different cards — can now be used with the small but powerful Jetson platform.

A graphics processing unit (GPU) based on NVIDIA’s Compute Unified Device Architecture (CUDA) enables the Jetson’s high-performance parallel processing, which is a match for Spectrum’s optional CUDA interface, SCAPP. This ensures that the Jetson is capable of handling the large volumes of data that can be acquired and generated by Spectrum’s products. In addition, the Jetson features a single PCIe slot that can accommodate any Spectrum PCIe card. As Spectrum put it in a press release, “the NVIDIA Jetson is a perfect fit!”

One example can be seen in Spectrum’s digitizers, which can be used to acquire electronic signals from system sensors or components. Sampling, from one to eight channels on a single card, is possible at rates from 5 million samples per second (5 MS/s) up to 5 gigasamples per second (5 GS/s) and with up to 16 bit resolution. This allows accurate, precise digitization of analog signals in frequencies ranging from DC to GHz, followed by rapid transfer to the NVIDIA Jetson platform for processing and analysis.

Spectrum also offers a wide range of PCIe AWGs that can be used as signal sources for controlling or stimulating other devices. Available models with one to eight channels per single card can produce signals with 16 bit resolution and output rates that go from 40 MS/s up to 1.25 GS/s. An AWG card plugged into the NVIDIA Jetson platform can produce analog waveforms of almost any shape and form.

“It's always exciting when you can provide solutions that come directly as a result of requests from our customers,” said Oliver Rovini, Spectrum’s chief technical officer. “The idea of combining an NVIDIA Jetson with a Spectrum PCIe card is very clever. It allows the creation of very small, low power systems which I'm sure will find their way into a host of portable and mobile applications in the very near future.”