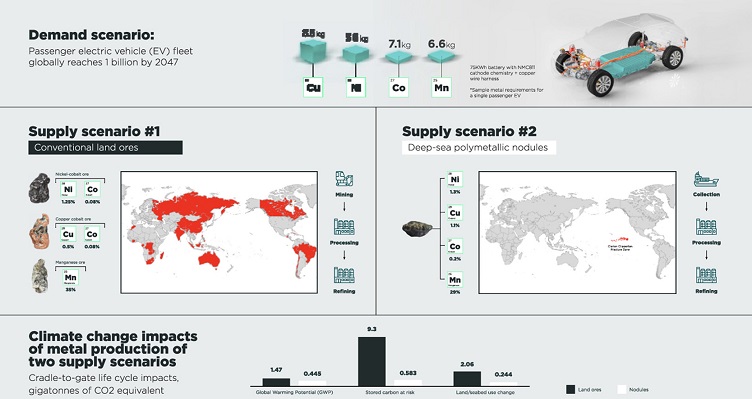 How deep sea rocks could be used to create electric batteries that are more environmentally friendly, giving off less CO2. Source: University of Delaware

Polymetallic rocks found on the floor of the deep ocean may be key to building better batteries to store energy and power electric vehicles (EVs), as well as being better for the environment.

Compared to mining the same metals on land, deep sea rocks have far less impact on the climate based on the indirect emissions and disruptions due to the mining, processing and refining of battery metals. The carbon intensity of producing metals like nickel has led to interest in low-carbon metal sources specifically from automotive OEMs such as Tesla Motors and Polestar that are pushing for new low-carbon metal sources.

The study into deep sea rocks, by researchers from the University of Delaware, goes beyond just considering carbon emissions from human operations. It also looks at the disruption of ecosystem carbon sequestration services caused by changes in land and seabed use to produce battery metals.

The study found that producing battery metals from nodules can reduce active human emissions of CO2 by 70% to 75%, stored carbon at risk by 94% and disruption of carbon sequestration services by 88%.

“Terrestrial miners are handicapped by challenges like falling ore grades, as lower concentrations of metal lead to greater requirements of energy, materials, and land area to produce the same amount of metal,” said Daina Paulikas, researcher from the University of Delaware’s Center for Minerals, Materials and Society. “Furthermore, the actual collection of nodules entails a relatively low energy, land, and waste footprint compared to a conventional mine. When it comes to emissions, even when we assume a complete phase-out of coal use from background electric grids for process inputs, our model shows that metal production from high-grade polymetallic nodules can still produce a 70% advantage.”

“Despite disturbing a larger area of the seafloor, metal production from nodules would cause much less carbon disruption,” said Steven Katona, marine biologist and co-founder of the Ocean Health Index, who contributed to the study. “This is because seafloor sediments store 15 times less carbon per square kilometer than an average terrestrial biome and there is no known mechanism for disturbed seafloor sediment to rise to the surface and impact atmospheric carbon. In contrast, mining on land requires removal of forests, other vegetation and topsoil to access the ore, store waste and build infrastructure. In the process, we lose stored carbon and disrupt carbon sequestration services for as long as land remains in use, which can be as long as 30-100 years.”

The full research can be found in the Journal of Cleaner Production.