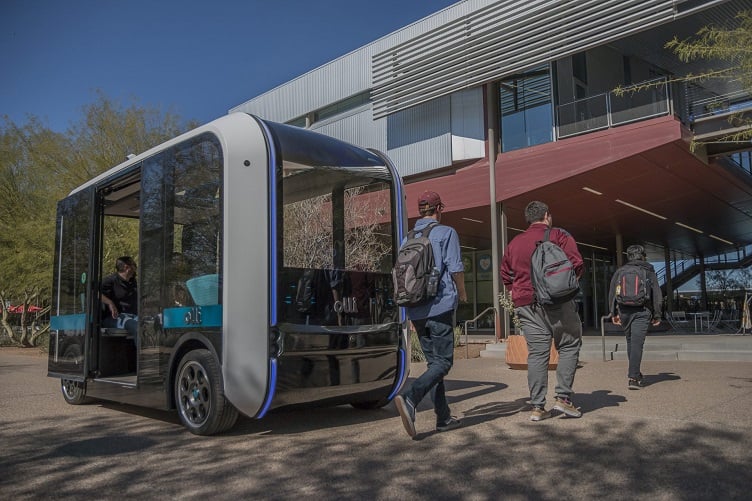 The Ollie 2 autonomous vehicle will be used to explore bringing a nationwide fleet of self-driving shuttles to the U.S. Source: Local Motors

Florida-based mobility-as-a-service (MaaS) vendor Beep is collaborating with Local Motors to expand its autonomous vehicle shuttles to a U.S. fleet.

Under the agreement, self-driving shuttles would be on both public and private roads broadly across the country using Local Motors’ Olli 2.0 autonomous, electric, 3D-printed shuttles for customer deployments. The companies will work to expand the operating domain of the multi-passenger, self-driving vehicles with its testing and information sharing program through the National Highway Traffic Safety Administration (NHTSA).

Earlier this year, Beep started a shared-ride service using Navya’s autonomous shuttles in the city of Peoria, Arizona, in a 60-day pilot program to gauge consumer interest along with the feasibility of these shuttles based on ridership adoption behaviors. After the outbreak of COVID-19, Beep and Navya partnered to use the shuttles to transport COVID-19 tests collected at a drive-thru testing location in Florida to a clinic in order to remove as much human contact as possible from the testing process.

Autonomous shuttles have been ramping up in testing this year with numerous programs — such as those in Linden, Ohio, and Gainsville, Florida — being adopted to test the feasibility of the technology as well as consumer attitude toward driverless vehicles.

The vehicles have no steering wheel or pedals but will always have an attendant on board to monitor the shuttle and communicate with Beep. The vehicles follow pre-programmed routes using advanced sensors and cameras and are monitored by the Beep Command Center, which communicates with the onboard shuttle attendant at any time.

The Olli 2.0 is directed by Robotic Research’s AutoDrive autonomous kit containing hardware and software for the autonomous shuttle to drive on complex road transportation environments and other low-speed areas involving first-mile and last-mile mobility.

“We’re living in a world where self-driving technology is needed now more than ever, and this partnership is a huge validator of the increasing demand for autonomous solutions,” said Vikrant Aggarwal, president of Local Motors. “By deploying more vehicles and introducing Olli to new, complex scenarios on public and private roads, we can provide safe, sustainable, and comfortable experiences for all riders now and in the future.”