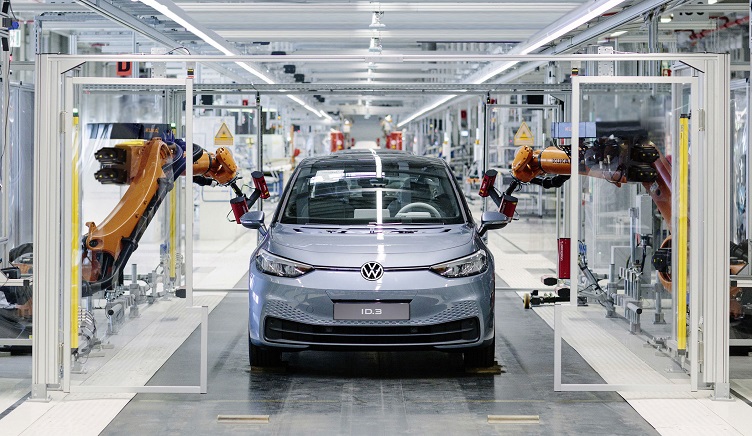 The ID.3 electric vehicle on the production line at the Zwickau manufacturing plant in Germany. Source: Volkswagen

Volkswagen has officially started series production on its first car in a new generation of electric vehicles (EVs).

The EV, called ID.3, is based on the company’s MEB modular electric drive toolkit — an all-electric platform geared toward carbon-neutral driving.

Volkswagen said it plans to sell about 22 million EVs worldwide by 2028 as part of a transition to an all-electric fleet in the coming years. Volkswagen recently upped its investments from $9.1 billion to $21.5 billion through 2023 to spend on both EVs and autonomous vehicles.

The ID.3 is manufactured in Volkswagen’s Zwickau manufacturing plant, which is undergoing a $1.3 billion conversion to total e-mobility production. Volkswagen plans to produce about 100,000 electric models in 2020. By 2021, it will up the production to 330,000 EVs, which the company claims will be the largest and most efficient EV factory in Europe.

“The ID.3 is a high-tech car from a high-tech factory,” said Thomas Ulbrich, brand board member for e-mobility at Volkswagen. “With some 1,700 robots, driverless transport systems and fully-automated manufacturing processes, Zwickau gives a contemporary insight into the shape of forward-looking high-volume production of EVs.”

The ID.3 electric car will be priced at $33,000 for the basic version and Volkswagen has already received 35,000 international pre-orders. Initially, the EV will be launched simultaneously in markets throughout Europe beginning in the summer of 2020.

Volkswagen said part of its move to switch to an entirely electric fleet is inspired by a desire to protect the planet. The company will be converting its manufacturing plants in Emden and Hanover, Germany, to electric production and begin building EVs starting in 2022.