A non-blocking radio frequency (RF) matrix fits well with a traditional vector network analyzer (VNA) to save time, save money, and improve overall quality when performing RF characterization testing on multiple devices. In a non-blocking RF matrix, power dividers are used to distribute multiple RF input signals to multiple outputs simultaneously. In-line RF switching allows for each input or output to turned on or off individually. This functionality can be used to enhance the capabilities of a traditional two- or four-port VNA. 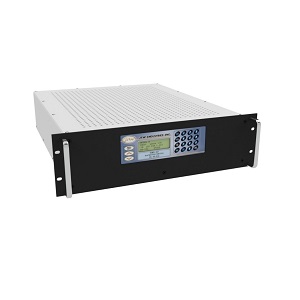 JFW’s super non-blocking matrices provide for complete connectivity and flexibility. They allow operators to run concurrent tests on a DUT using a traditional two-port VNA, as the matrix supports simultaneous connections between both inputs and outputs. Inputs are also internally terminated to isolate RF signals on unused ports, preventing signal interference and crosstalk.

The number of active paths in a non-blocking matrix switch is determined by the number of RF switches in the matrix and JFW can provide custom models to support various test systems.

Multiple-input/multiple-output or MIMO RF components — used in mobile communication standards like 802.11n, LTE, and HSPA+ — are becoming increasingly more common. As more manufacturers integrate these multi-port RF components into their product designs, there is a growing need to optimize RF testing solutions to suit. This has a direct effect on the bottom line in high-volume production environments.

The ability of a non-blocking matrix switch to minimize operator intervention is one manner by which they can increase throughput, repeatability, and overall efficiency. They eliminate the practice of cabling and un-cabling multi-port DUTs when running multifaceted tests. This streamlines an otherwise time-consuming task, thereby saving money, while decreasing the chance for human error when reconfiguring the test environment.

The flexibility, scalability and reconfigurability of an RF matrix switch is largely dependent on the number of input/output ports, the number of active paths available at one time, and the manner by which an RF signal can be routed through the device.

Both non-blocking and super non-blocking RF matrices can take a single input line and route it to several outputs as well as take multiple input lines and feed them to a single output. This functionality allows users to address test requirements of complex multi-port components with a single test station.

In either test case, throughput is effectively doubled. Rather than operating in standby mode or waiting for sequential measurements to be made, multiple tests are conducted simultaneously. Each input can be routed to multiple outputs and each of those outputs are capable of receiving multiple inputs.

In one test scenario, a JFW blocking RF matrix was deployed to address production testing of DOCSIS 3.1 components, devices and systems for cable television and broadband applications. For this application, input and output ports are set to a 75-ohm impedance with a frequency range of DC to 1,700 MHz. JFW’s solution, model 75MS-035 F, was a 2 x 12 non-blocking matrix. This test solution allows for any of 12 RF inputs to be connected to either of the VNA’s test ports, thus increasing the throughput of devices being testing by 6X. 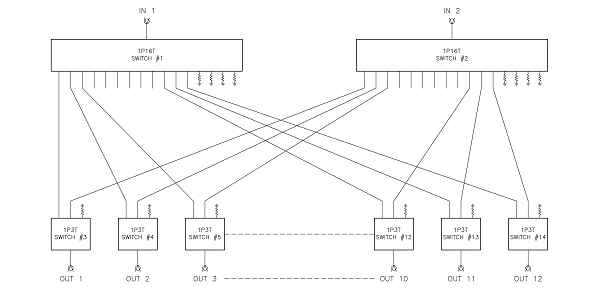 JFW can provide RF matrix switches in both 50 and 75 ohms and in a variety of different frequency ranges to support various applications.

JFW’s non-blocking matrix switches incorporate either N or SMA RF connectors. They are matched to 50 ohms or 75 ohms impedance in frequency ranges from DC to 40 GHz and are available in rack-mountable enclosures. Remote control of RF path settings can be supported by Ethernet, RS-232 and GPIB. Both Ethernet and serial models feature JFW’s latest generation 3.1 firmware with easy-to-use, ASCII-formatted commands and GUI included. A front panel display and keypad also allow for manual control.

Non-blocking RF matrices address testing throughput, repeatability and overall efficiency of RF test systems by enhancing the capabilities of a traditional two- or four-port VNA. JFW’s super non-blocking RF matrices takes this one step further as they support fan-in and fan-out capabilities. They not only facilitate testing of complex multi-port RF components, but they are also flexible, scalable and re-configurable, thereby increasing throughput, repeatability and efficiency of a single test station to drive down testing costs.