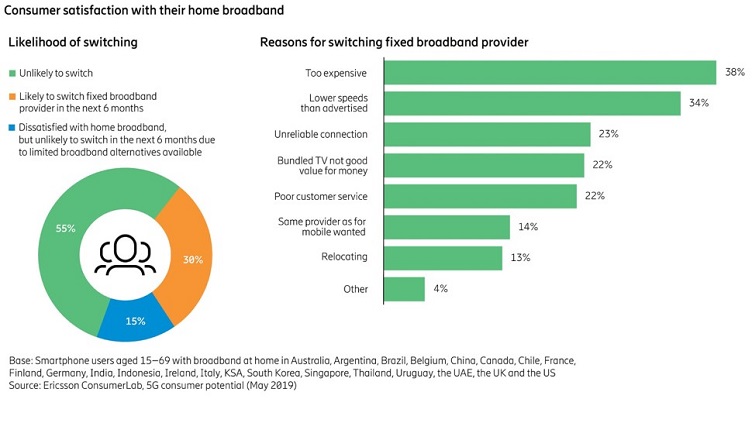 What consumers are looking to 5G in terms of broadband technology for the home. Source: Ericsson

According to Swedish telecom Ericsson's research, smartphone users are willing to pay a 20% premium for 5G and early adopters will pay a premium as much as 32%. Consumers see the value in 5G services even if they know most use cases won’t go mainstream until two or three years from now. Even so, 67% are willing to pay for these use cases in the future, Ericsson said.

Ericsson said this busts the myths that 5G will not impact the market in its beginning phases and that there are no real use cases for price premiums on 5G.

Myth: There are no near-term benefits

Beyond just a bump in internet speed from 5G — which depends on the limited regions of a city that has deployed 5G — Ericsson said that other near-term benefits will include more home broadband choices and an easing of urban network congestion.

More broadband choices will come in the form of fixed wireless access (FWA), which will give choices of up to 20 GB/sec connections for homes and businesses. Ericsson said based on its research, there are an average of six connected screens per household globally. With multiple people using so many screens and connecting to the internet in some way, Wi-Fi in the home is under strain.

Ericsson said that 8 in 10 consumers are already looking to switch broadband providers and would consider replacing or supplementing their existing service with 5G FWA. Of those surveyed, 15% of consumers were unsatisfied with their home broadband but were unlikely to switch either due to lack of broadband choices or lack of competition.

The smartphone market is struggling, as shipments have declined for the past six months. Part of the reason is that the lifecycle for smartphones is pushing to 36 months and beyond, with high-priced models offering little incentive to consumers to upgrade before 5G phones become available.

Adding to this, smartphones will likely evolve by adding foldable screens, holographic projection or 360° cameras, and the likelihood of smartphones driving 5G technology is unlikely. Ericsson said that 43% of the consumers it surveyed thought form factors and features of smartphones cannot take full advantage of what 5G offers.

Additionally, half of all consumers believe that smartphones will exist in the future, but will morph into augmented reality (AR) smart glasses or another form factor in the next five years.

Consumers predict that the amount of data used in the future with 5G will be massive, with video consumption being the driving force.

Ericsson said an average of three more hours of video content will be consumed weekly and on-the-go via 5G on mobile devices, and one of those hours will be on AR or virtual reality (VR) glasses. Half of all users expect their mobile cellular data usage to increase significantly on 5G, and one-in-five could see a data increase of 10 times, with usage of 200 GB per month. About 60% of those surveyed said connected robots will be a status symbol in the future, while 40% expect 5G in the car to be as important as fuel efficiency and engine power in the next five years.

Ericsson forecasts average monthly cellular data use for a smartphone user in North America to reach 50 GB by the end of 2024, up from about 8.68 GB today. If AR/VR is factored in, this use could be exponentially higher, as 10 minutes of AR use each day using 5G could translate to 50 GB per month per user.

Consumers expect cloud game streaming services with low lag and VR cloud gaming to go mainstream within one to two years of 5G launch, but this is of low interest compared to other use cases such as self-driving cars and in-car entertainment, which is about three to five years away in terms of mainstream adoption.

Ericsson’s study not only looked at consumer willingness to pay for these uses as part of a 5G plan, but also at the value that consumers could derive from them. The company conducted more than 35,000 online interviews with smartphone owners and daily internet users across 22 countries.

The hype around 5G is building with the official release of live networks in a handful of countries. Much is promised about what can be done with 5G such as enabling self-driving cars to communicate with each other, encouraging healthcare technology advances, enabling robots to work outside for longer and farther than ever before, enabling first responders to do their jobs more effectively and exploring future security standards. However, the question remains as to what can actually be done with the next-generation cellular wireless communication, especially in its infancy.

Find out more about Ericsson’s 5G findings with its 5G Consumer Potential report.