Faster Than a Speeding Laser 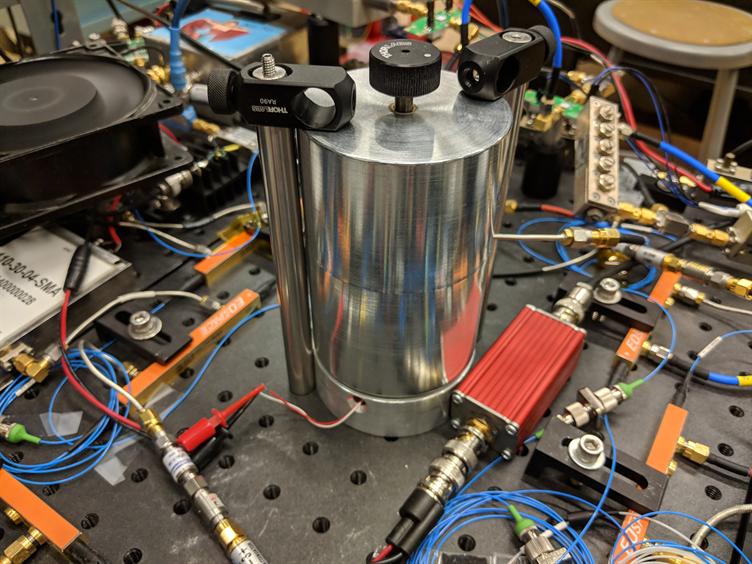 Using common electronics, physicists at the National Institute of Standards and Technology (NIST) have built an electro-optic laser with a hundredfold pulse increase over conventional ultrafast lasers.

The advance comes from a filtering method developed by the scientists, designed to reduce heat-induced interference that would otherwise ruin the consistency of electronically-synthesized light.

"We tamed the light with an aluminum can," said project leader Scott Papp. That is to say, they employed a “cavity” similar to a soda can to stabilize signals bouncing back and forth. Fixed waves emerge at their strongest frequencies, filtering out others representing electronic noise.

Ultrafast light is conventionally produced by an optical frequency comb that acts like a precise “ruler” for light. Combs are usually made with “mode-locked” lasers, which form pulses from multiple frequencies that overlap to create optical-microwave links. Ultrafast events are faster than the nanoscale, measured in picoseconds (trillionths of a second) to femtoseconds (quadrillionths of a second).

The new electro-optic laser, by contrast, imposes microwave electronic vibrations on an infrared continuous-wave laser — effectively carving pulses into the light. An oscillator stabilized by the “soda can” cavity produces identical optical pulses at a microwave rate. These are then directed through a microchip waveguide structure to generate many more colors in the frequency comb.

According to David Carlson, lead author of a just-published study on the project, conventional mode-locked lasers produce pulses every 10 nanoseconds; for the new laser, that rate increases to every 100 picoseconds, a hundredfold increase.

Potential applications include chemical and biological imaging, according to Papp; hyperspectral imaging that currently takes a minute, for instance, could happen in real time. In addition, the laser was constructed using commercial telecommunications and microwave components — bolstering system reliability for applications such as long-term optical clock network measurements, communications or sensor systems in which data needs to be acquired faster than is currently possible.

The project is described in the Sept. 28 issue of Science.