Cell-sized Robots Can Be Deployed on Recon Missions 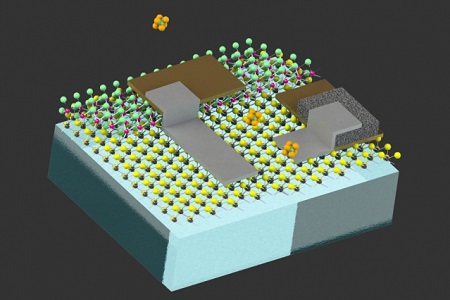 Diagram illustrating the design of the tiny devices, which can float freely in liquid or air. Source: Courtesy of the researchers/MIT newsNewly developed devices about the size of a human egg cell may be the smallest robots yet that can sense their environment, store data and carry out computational tasks. Consisting of tiny electronic circuits made of two-dimensional materials, the devices could be used to flow through oil and gas pipelines, the air inside chemical processors and refineries, or even intestines – to detect problems.

The robots make those journeys by hitching a ride on colloids – particles so small they can stay suspended indefinitely in liquid or air. The physics of that phenomenon is comparable to the way dust particles can float indefinitely: the random motions of air molecules that collide with them is stronger than the pull of gravity.

"Colloids can access environments and travel in ways that other materials can't," said Michael Strano, an MIT professor of chemical engineering who served as senior author for a study about the new devices.

Using two-dimensional materials allowed the MIT team to bypass the limitations of conventional microchips, which generally have a flat, rigid substrate that would be subject to complex mechanical stresses if similarly sent on colloidal piggybacking journeys. Those chips are also “very energy-thirsty,” as Strano put it – as opposed to thin-film electronics, which can be “powered by nanowatts with subvolt voltages,” according to paper lead author and MIT postdoc Volodymyr Koman.

By contrast, the new robots are self-powered, requiring neither external power sources nor internal batteries. A simple photodiode provides sufficient electricity for their computation and memory circuits, which can sense and store data about their surrounding environment. After they have accomplished their mission, retroreflectors allow them to be easily located; probes can then be used to access their data. The team hopes to subsequently improve the data delivery method in a way that will eliminate the need for physical contact.

Strano noted that other groups that have worked on creating similar tiny robotic devices have focused on methods to control their movement, such as replicating the tail-like flagellae used by microbial organisms for propulsion. Strano believes, however, that these types of cellular movement systems are more useful for local-scale positioning than significant movement. The creation of complex electronics that can be aerosolized or suspended in a colloidal liquid, Strano added, makes the new devices “very smart particles, by current standards.”

To be sure, the oil and gas industry could use devices like these. Currently, the primary method of checking for pipeline leaks and other problems is a manual inspection by a crew using expensive instruments. The medical industry could also use the devices to search the digestive tract for signs of inflammation or other indicators of disease.

“We see this paper as the introduction of a new field" in robotics, Strano said. As we reported earlier this year, the team presented research on the devices at the 255th National Meeting & Exposition of the American Chemical Society. Their study was published recently in the journal Nature Nanotechnology.