Researchers at MIT have designed what they claim is the first three-dimensional graphene that appears in a sponge-like configuration that has the strength 10 times that of steel. 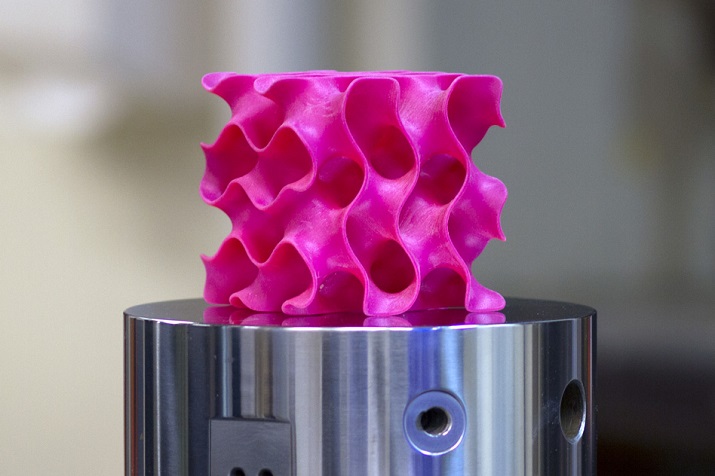 Researchers were able to make 3-D graphene by heating flakes of graphene and forming it into unusual geometric shapes. Source: MIT MIT researchers analyzed the material’s behavior down to the level of individual atoms within the structure and were able to produce a mathematical framework that closely matches other experiments focused on creating 3-D graphene, but that resulted in a material with less strength than originally expected.

2-D graphene materials are flat sheets that are just one atom in thickness but can be indefinitely large in other dimensions while having exceptional strength and electrical properties. Because of the thinness of the material, they are not useful for making 3-D materials that could be used in vehicles, buildings or devices. MIT was able to realize converting these 2-D materials into three-dimensional structures.

The MIT researchers were able to compress small flakes of graphene using a combination of heat and pressure. This produced a strong, stable structure resembling corals and microscopic creatures called diatoms. These shapes were proven to be remarkably strong and through simulations and compression tests through a tensile loading machine, the 3-D graphene material was proven to have 5% the density of steel but 10 times the strength.

Researchers equate the 3-D graphene material to sheets of paper. Paper has little strength along its length and width and can be easily crumpled. But when made into certain shapes, such as rolled into a tube, the strength along the length is much greater and can support substantial weight. The geometric arrangement of the graphene flakes after treatment naturally forms a very strong configuration, researchers say.

MIT researchers used a high resolution, multimaterial 3-D printer to create the new configurations of the 3-D graphene and then tested for their tensile and compressive properties. Based on these tests, MIT says they have ruled out other proposed ideas that 3-D graphene structures could be lighter than air or be used as a replacement for helium in balloons because the material would collapse from the surrounding air pressure.

However, the unusual geometric shapes that graphene naturally forms under heat and pressure could be enlarged to thousands of times their natural size, making it available for large-scale structural buildings. MIT researchers give an example of concrete for a structure, such as a bridge being made with this porous geometry, providing comparable strength with a fraction of the weight.

And because the shape is filled with tiny pore spaces, the material might find a home in filtration systems for water or chemical processing, or use in energy storage systems.