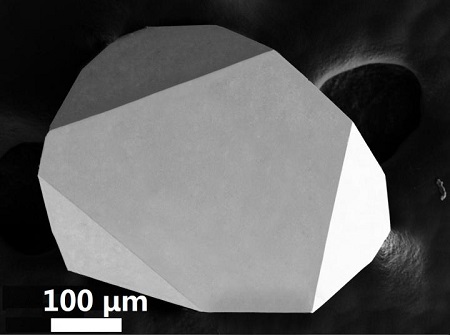 A crystal of boron arsenide imaged with an electron microscope. Source: University of Texas at Dallas.You could call it an issue that’s really started to “heat up." With smaller, faster and more powerful electronic devices, finding ways to keep computer chips from overheating has become increasingly challenging.

Most computer chips are made of silicon, a crystalline semiconducting material that does an adequate job of dissipating heat. But newer devices draw more current and generate more heat, and even with the addition of other cooling technology incorporated into devices, silicon can handle only so much.

"For high-powered, small electronics, we cannot use metal to dissipate heat because metal can cause a short circuit. We cannot apply cooling fans because those take up space," according to Bing Lv, an assistant professor of physics at the University of Texas at Dallas. "What we need is an inexpensive semiconductor that also disperses a lot of heat."

To that end, Lv and his colleagues have produced crystals of boron arsenide, a semiconducting material with an extremely high thermal conductivity. Lv’s work over the past three years has focused on boosting the performance of boron arsenide. Previous research had predicted it could spread heat as well as the material with the highest-known thermal conductivity: diamond. While diamond is impractical for widespread electronics use, its thermal conductivity clocks in around 2,200 watts per meter-kelvin (W/mK). Silicon, by contrast, has a value of around 150 W/mK. Lv’s initial work produced boron arsenide crystals with a value around 200 W/mK. By optimizing the crystal-growing process, Lv and his team have managed to boost that value to about 1,000 W/mK.

The optimized process involves a technique called chemical vapor transport, which brings raw elements through a temperature differential within a chamber. To measure thermal conductivity, research groups from the University of Illinois at Urbana-Champaign used a method called “time-domain thermoreflectance” (TDTR). It was developed at Illinois over the past 12 years.

"TDTR enables us to measure the thermal conductivity of almost any material over a wide range of conditions and was essential for the success of this work," said David Cahill, head of Illinois’ Department of Materials Science and Engineering and a corresponding author of the boron arsenide study.

Lv said the next step will include trying other processes to improve the growth and properties of the material for large-scale applications.

The research appears in the July 5 edition of Science.