5G Expands Beyond Cellular: What You Need to Know

Every generation of cellular technology has endeavored to make the mobile communications experience better by increasing reliability, adding new features and enhancing data rates. This applies to the current fourth generation (4G) and even to the upcoming fifth generation (5G) standards. However, that’s where similarities end since 5G goes far beyond its predecessors in the breadth of the applications it serves and the technologies it will employ to deliver them.

Marketing hype notwithstanding, 5G has just now been formally launched. In June 2018, the Third Generation Partnership Project (3GPP) finalized the massive set of standards that underpin full deployment of 5G, in particular its new network architecture called 5G New Radio (NR). The result is that wireless carriers, device manufacturers and others serving the industry can develop 5G solutions knowing that there is a standards-based roadmap to follow. 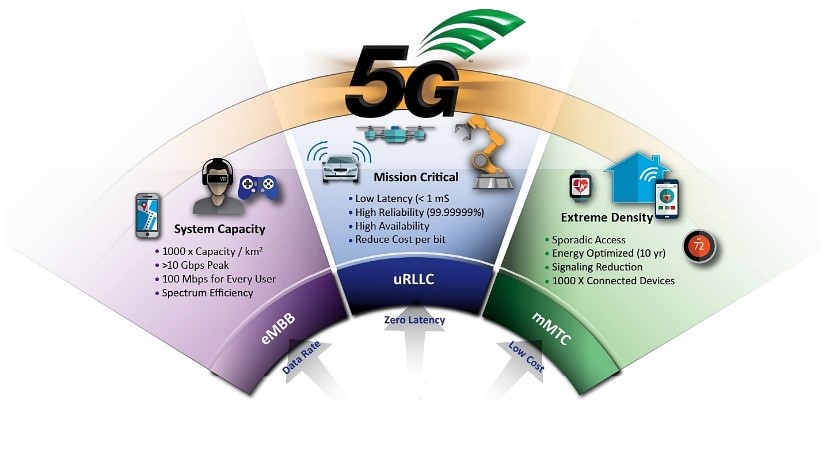 5G has so many different facets, underlying technologies and potential applications that rolling it out as a single entity would have been enormously difficult. The choice was made to divide the application pie into three usage cases: enhanced mobile broadband (EMBB) for mobile platforms; massive machine-type communication (MMTC) tailored for IoT; and ultra-reliable, low-latency communication (URLLC) for high-reliability, low-latency applications (Figure 1).

This makes sense given that design engineers have the challenging task of developing hardware and software for applications with entirely different specifications, despite the fact that many of the technologies used in the three usage cases are the same or very similar. For example, cellular networks and therefore EMBB are designed to support a moderate number of devices that communicate at high speed. EMBB requires wider channel bandwidths, use of spectrum sharing, massive MIMO, advanced channel coding and other features.

The deployment of EMBB should make it possible to accelerate 5G trials − presumably allowing 5G to enter service earlier than had been anticipated − while allowing continuous improvements in LTE-Advanced and LTE-Advanced Pro over the coming years. EMBB will deliver downlink data rates much higher than those achievable today, providing a path for wireless carriers to meet the requirements in the full “non-standalone” version of 5G NR when it is launched.

In contrast, MMTC focuses on IoT applications where a much larger number of devices are connected to an access point or gateway. In these cases, sensors receive and transmit small amounts of data at low speeds and often operate for five years or more when powered by coin cell batteries. The design focus here is on achieving acceptable performance using simple devices that consume very little power.

URLLC applications will typically have high data rates, but may serve only a few devices rather than potentially millions. In order to reduce latency to the least possible amount, potentially a few milliseconds, it’s mission critical that these systems function properly. Examples of some applications include autonomous vehicles, telesurgery and other medical procedures and public safety.

Separating these applications into three relatively distinct categories allow development to proceed more efficiently, often independent from the others. We expect initial development will be focused on EMBB, with URLLC/low latency standards to follow.

It’s important to remember that, contrary to what has sometimes been reported, 5G does not spell the end of LTE. Rather, it will remain a foundational element within 5G and will continue to evolve for years (Figure 2). For example, Gigabit LTE will leverage features already resident in LTE such as carrier aggregation, high levels of MIMO, high-order modulation schemes, as well as the use of unlicensed spectrum and spectrum sharing. In addition, LTE is a key element in cellular vehicle-to-everything (C-V2X), the connectivity solution for autonomous vehicles. 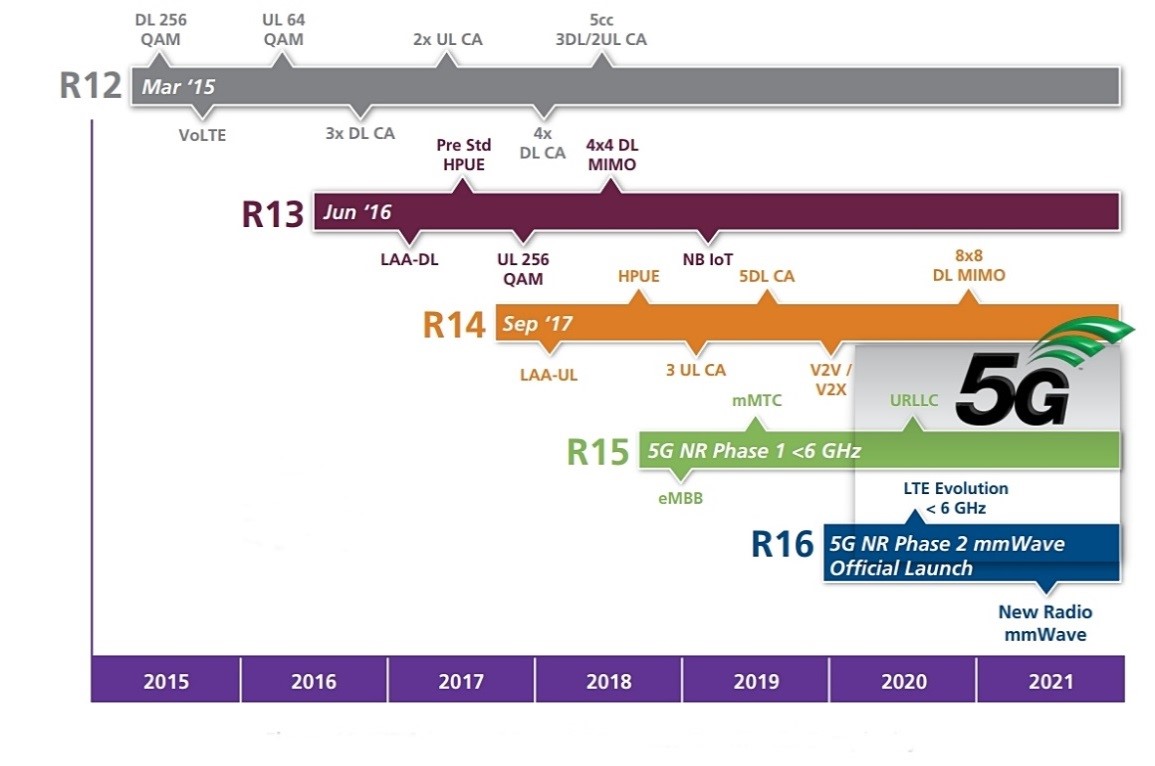 Figure 2. LTE and its evolution to (and through) 5G. Source: Skyworks

The Challenge for Designers

Obviously, all three categories present massive opportunities for designers of everything from passive components to the most highly integrated system-on-chip devices. In addition to the components and subsystems themselves, much of the technology that has been proposed for 5G has never been deployed, or in some cases, developed at all.

While it may not be that transparent, one takeaway is that all mobile spectrum will be utilized in the 5G era. That means the already crowded spectrum is about to get even more crowded. For current spectrum below 3 GHz, we expect to see a significant amount of LTE re-farming. By this we mean that existing 4G bands will have the ability to be modulated into the 5G Radio Access Network. Beyond the current spectrum, the FCC, government organizations, the wireless industry and other interested parties are working hard to free up the spectrum that will be required to support all the applications driven by 5G. This will include- new swatches in the sub 6 Ghz and millimeter wave ranges. Almost all of these frequencies will be higher than 3.5 GHz, the highest frequency used by cellular services today. The higher the frequency, the greater the difficulty for both designers of components and subsystems, consumer products and the infrastructure required to support them.

One of the greatest challenges is incorporating more capabilities within end-user devices such as smartphones. Opening the back cover of any smartphone reveals that an astonishing amount of functionality is already present and occupies a surprisingly small amount of the interior of the device. This is especially apparent when considering that the battery takes up more than half of that space. Adding the capabilities of 5G within these handheld products will require levels of integration never before achieved, including transceivers and RF front-ends that cover more frequencies well into the millimeter-wave region.

Cellular infrastructure, which for years consisted mostly of base station electronics that consumed an entire equipment shelter, will now be accommodated in small cells that must be inexpensive enough to deploy in huge numbers, while performing essentially the same function as their larger counterparts.

With regard to IoT devices that span a very broad range of architectures − from relatively simple home automation solutions to miniature complex subsystems that incorporate the requisite transceivers and front-ends as well as some data processing capabilities – functionality must be achieved in a device that operates at perhaps 1.8- 3 V for up to 10 years, and potentially hostile environments, with minimal or optimally zero maintenance.

Perhaps the most intimidating application is the autonomous vehicle where dozens of sensors ranging from the quite simple to the extraordinarily complex must function in under-hood environments where top temperatures can reach more than 200° F, while at the same time being cost-effective and extremely reliable. Communication devices serving these vehicles will likely be at least as complex and highly integrated as today’s smartphones, if not more. They will be complemented by subsystems using general purpose and graphics processors that will meet or exceed the performance of today’s high-end laptop computers.

Yet, the most demanding category within 5G is URLLC, which is dominated by applications where near zero latency is crucial. It is here where we can expect a modification to the network to bring more computing power towards the outer edge of the network to reduce round trip transit times for mission critical services. Minimum latency is defined by the laws of physics, so it can be reduced by only so much over a given distance. Delivering latency of just a few milliseconds when the sender and receiver are hundreds or thousands of miles apart is a massive challenge. For example, telesurgery potentially connects the surgeon on one continent with robots and operating-room staff on another. The inability to achieve zero latency has impeded the progress of this application for many years. Now 5G has the potential to solve it.

At the end of the day, it’s the RF front-end that is the core of any device, whether a smartphone, IoT sensor or any other connected product. As a contributor to wireless standards for many years and a participant in 3GPP 5G development organizations, Skyworks is at the forefront of technology that will enable all three usage cases outlined above.

Sky5™ is our unifying platform enabling 5G applications. Our solutions offer breakthrough performance, footprint and power efficiency and are helping to transform the way we live, work, play and educate.