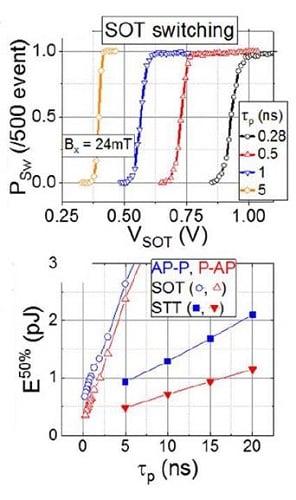 The performance of the SOT-MRAM. Source: ImecResearch house Imec is demonstrating the potential of fabricating spin-orbit torque MRAM (SOT-MRAM) devices on 300-mm wafers using CMOS compatible processes for the first time during this week’s 2018 Symposia on VLSI Technology and Circuits.

Imec said SOT-MRAM has recently emerged as a non-volatile memory technology that can overcome the limitation of spin-transfer torque in MRAM memories. So far, however, it has only been demonstrated in a lab. Imec was able to fabricate SOT-MRAM device modules on 300-mm waters using CMOS-compatible processes.

The switching behavior of the SOT device is similar to what is found on STT-MRAM but with unlimited endurance. In SOT-MRAM the magnetic tunnel junction consists of an SOT/CoFeB/MgO/CoFeB/SAF perpendicularly magnetized stack, using beta-phase tungsten for the SOT layer.

Future steps of this technology will work to further reduce the energy consumption by bringing down current density and by demonstrating field-free switching operation.