Electronic components and systems are highly susceptible to damage and malfunctions caused by ionizing radiation. These environments may be encountered in high altitude flight and in outer space, as well as in the vicinity of nuclear reactors or devices. In order to ensure the reliable operation of electronics subjected to such environments, a variety of techniques can be employed to make them radiation tolerant. This article will highlight the value of the various radiation mitigation technologies available. 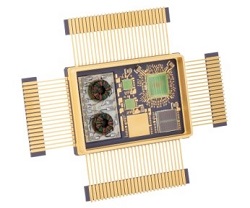 Figure 1. Total-Space ACE rad hard components. Source: DDC
Traditionally, it has often been necessary to use components that are rad hard by design at the semiconductor design level to create radiation-tolerant electronic systems. The radiation hardening is accomplished by producing electronic components incorporating several possible techniques and materials, including: using rad-hard cells in an ASIC design, using insulating substrates, such as silicon-on-insulator (SOI) or silicon-on-sapphire (SOS); or wide band gap semiconductors such as gallium nitride (GaN) and silicon carbide (SiC). 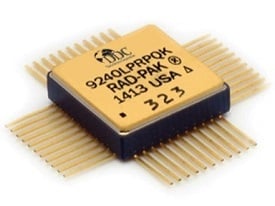 Figure 2. RAD-PAK® spot shielding packaging technology. Source: DDCSpot shielding involves adding radiation mitigating material to the package of individual electronic components in order to prevent the radiation from reaching the semiconductor die. This approach has the advantages that the latest commercial electronics can be used and the shielding thickness can be tailored to the demands of the radiation environment in a particular space mission. For instance, DDC offers radiation tolerant microelectronic solutions utilizing its patented RAD-PAK® packaging technology (Figure 2) that incorporates high-density radiation shielding in the microcircuit package, providing a total dose immunity of 100 Krads or higher. This provides a solution that is lighter-weight than box shielding while preventing radiation induced failure during a lifetime in orbit.

Protons, cosmic rays, and solar heavy-ions can cause a single bit to spontaneously flip to the opposite state. Error-correcting codes store redundant data in order to be able to recover stored information even when some of the data has been corrupted. The amount of data that can be corrected without a system error will depend on the strength of the code. While ECC enables high-reliability performance in radiated environments, there is a trade-off between the number of correctable errors and the additional memory overhead required. For many modern flash memory devices, ECC codes are required even in non-radiation environments, and in some cases incorporated into the device.

In many safety-critical systems, failure-free operation is ensured by the use of three components. An error in one component may then be out-voted by the other two components. In a triple-redundant system, two of the three redundant components must fail before the system fails. Since each component is expected to fail independently, the probability that any two fail simultaneously is extremely remote. Triple mode redundancy can make systems radiation tolerant and highly reliable; however, they can also increase the size and power consumption required, sometimes by a factor of three. 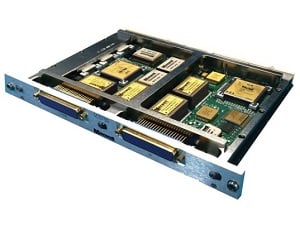 Rapid advancements in the semiconductor industry make it appealing to use commercial off-the-shelf (COTS) components since the performance of radiation-hardened alternatives often lags behind COTS parts, assuming that the radiation hardened alternatives are even available. While COTS components may initially provide low development and hardware costs, their use may result in increased susceptibility to radiation, poor packaging, reduced reliability and a lack of lot traceability. COTS components can safely be used for non-critical, short duration missions, and if needed, their radiation hardness can be improved through spot or box shielding and redundancy.

Space-qualified design and manufacturing facilities, like those of Data Device Corporation (DDC), can assist electronic system designers and engineers in the development of radiation-hardened components and systems. DDC uses various combinations of the techniques reference above to create radiation-hardened components and subsystems. For example, their SCS750® Single Board Computers for space (Figure 3) are currently deployed on dozens of space missions to provide error-free mid- and high-performance computing, for on-board data processing, mission planning and critical decision-making. As shown by the functional block diagram (Figure 4), DDC incorporated several radiation-hardening technologies to make the SCS750 radiation-tolerant, including the use of triple mode redundancy, rad hard by design components, error-correction codes and spot shielding. 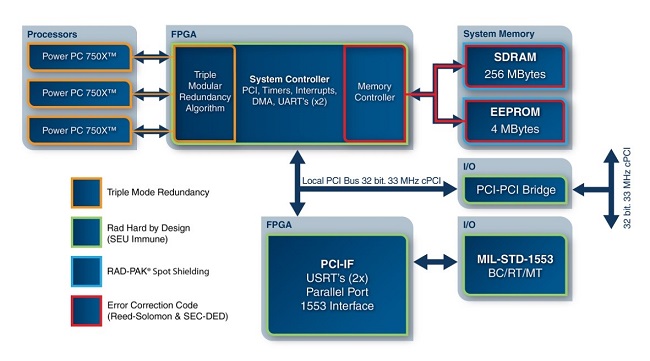 DDC, the leader for more than 50 years in high reliability data networking, motion control, and power control technology for the aerospace and defense industries, has provided space-qualified radiation hardened solutions to the space industry for more than 30 years. This includes supplying MIL-STD-1553, motion feedback, and motor drive and controller hybrids for use on launch vehicles, satellites, deep space applications, and the International Space Station. DDC develops rad hard by design and radiation-shielded products, including semiconductors and single-board computers. DDC is fully qualified to build, test and qualify hybrid circuits in accordance with MIL-PRF-38534 for all classes, including class H and K. DDC’s Center of Excellence for Radiation Tolerant Microelectronics and Single Board Computers located in Poway, California is also qualified to MIL-PRF-38535 to support Class S, V, B and Q production. Additionally, DDC specializes in understanding the radiation performance of commercial semiconductors, qualifying selected components for use in space, integrating them with proprietary radiation mitigation (RAD-PAK®) technologies, and manufacturing and screening products in DLA approved MIL-PRF-38534 and MIL-PRF-38535 facilities. For more information, please visit www.ddc-web.com.