Modern digital electronics present a challenge to designers of spacecraft power systems. Compared to earlier generations of devices, new high-performance FPGAs, ASICs and processors require increased performance from the power supply. The latest digital devices run on supply voltages ranging from 1 to 3.3 V or lower and require high current and fast response time. Many devices have several different voltage rails that must be powered on and off in a precisely controlled sequence. 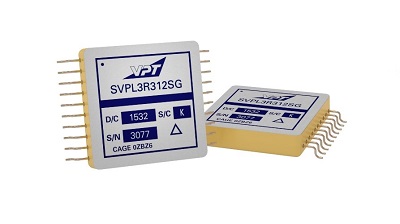 Figure 1. The SVPL series of space-ready point-of-load dc-dc converters employs SMT packaging technology, an industry first. Source: VPT PowerSmall size is a requirement as well, achieved by fitting more features into a smaller space by reducing the number of components, maximizing the conversion efficiency, and minimizing the overall power consumption.

A satellite must operate in a high-radiation environment for many years. During that time, it must maintain tight tolerances over a wide temperature range. A dc-dc converter designed for use in space must meet rigorous verification and validation requirements defined by a series of MIL standards. Hybrid microcircuits and multi-chip modules are covered by MIL-PRF-38534. Table 1 shows a few of these requirements; consult VPT Power’s Application Note No. 10 for a detailed discussion of the different applications. Table 1: A sample of the requirements for a space-borne DC-DC converter. Source: VPT Power

The level of protection against radiation is one area where space-qualified devices stand alone. Radiation poses a severe challenge to the power system designer, and manufacturers of space-qualified devices must satisfy stringent standards for radiation hardness set by the appropriate regulatory agency. For military applications, for example, the Defense Logistics Agency (DLA) must approve a Radiation Hardness Assurance plan, and the testing must adhere to the strict test methods specified in MIL-STD-883.

The categories tested are as follows:

TID is a measure of the energy absorbed in semiconductor components from naturally occurring sources of radiation such as protons and electrons. Over time, the accumulation results in the slow degradation of performance specifications.

Many bipolar integrated circuits show increased parameter degradation when exposed at low dose rates more typical of a space environment than the high dose rates used in TID degradation testing. Components that show ELDRS are tested for TID at a low dose rate below 0.01 rad (Si)/s, compared to the standard high-dose rate of 50-300 rad (Si)/s.

DD is caused by protons and neutrons. Particles displace atoms in the bulk silicon crystal structure, leading to a gradual performance degradation.

Depending on where it is deployed, a spacecraft can obtain its primary power from a variety of sources. For short-term applications, primary batteries or fuel cells may be used. Spacecraft operating in the inner solar system usually use photovoltaic solar cells, and radioisotope thermoelectric generators (RTGs) supply power in the outer solar system where the sunlight is too weak to produce sufficient power. Regardless of the source, a typical spacecraft power system will use a dc-dc converter to take the raw energy and create a stable power bus to distribute throughout the spacecraft.

Each subsystem or payload will receive this primary power bus. Isolated dc-dc converters within the payload will create the voltages needed for sensors, analog electronics, and other payload electronics.

The digital electronics will typically be powered using a two-stage approach. An isolated dc-dc converter takes the primary voltage, perhaps 28 V, and steps it down to a system bus voltage of 3.3 or 5 V for distribution to the digital cards. Following the lead of commercial designs, point-of-load (PoL) dc-dc converters on each card step the system bus voltage down to the low voltages and high currents needed by the digital cores and peripherals.

Unlike his or her commercial counterpart, the spacecraft designer may not have access to the latest components and technologies, but instead must choose from a relatively limited set of high-reliability, radiation-hardened (rad-hard) power converters and discrete components.

Benefits of a Hybrid Solution

When designing a power converter, a discrete design may seem like an attractive option: it offers the greatest opportunity for flexibility, customization, and perhaps a lower part cost. But designing a PoL switching converter from scratch and placing it on a board adds time to the development schedule and requires a variety of engineering skills — analog design, control theory, magnetics, thermal analysis — that may not be readily available.

A hybrid module offers an attractive alternative. It packages the controller, power semiconductors, inductor, bulk capacitance, input capacitance, current-limit components, and control-loop components together into a single package. Internally, it consists of bare die and passive components mounted on a substrate. The result is a compact, efficient, and low-noise power supply module that can easily be integrated onto the board with the digital electronics components.

For the designer, a hybrid provides a tested solution with guaranteed performance and avoids many of the in-depth analytical tasks needed with a discrete design, such as inductor selection and qualification, loop compensation, and printed circuit board layout. This plug-and-play aspect removes another item from the design to-do list, saving time and money.

Combining multiple components into a single unit lowers the bill-of-materials (BoM) parts count. The hybrid also simplifies the characterization since the specifications on the datasheet account for the variations of the individual components.

For many years, power system designers in other application areas have had the choice of a variety of surface-mount technology (SMT) packages, but spacecraft designers have been restricted to packages with through-hole technology (THT). Although THT packages have advantages in certain situations and are widely used in prototype builds, they require interrupting an automated manufacturing flow to add a less-reliable hand-solder operation. THT packages are also generally larger than their SMT equivalents.

Meeting the demand for space-qualified, SMT PoL converters, VPT Power’s new SVPL family of products features high efficiency up to 93 percent, fast transient response, and an adjustable output from 0.8 to 3.8 V, making it an ideal choice to supply applications such as high-performance space processors.

The SVPL series is a family of SMT hybrid device packaged in a precision seam-welded hermetic metal case. The low-profile package measures 1.110 x 1.110 x 0.276 in. and is available with standard gullwing or optional straight-lead configurations. The parts in the family integrate a variety of Intersil ISL700x radiation-hardened monolithic buck regulators (Figure 2), operating at a nominal switching frequency of 500 kHz or 1MHz, depending on model. The SVPL can be externally synchronized to other converters or a common system clock.

The table above shows the three parts currently in the SVPL family. The fixed-input-voltage devices operate from a nominal 3.3 or 5 V bus; they offer the highest efficiency and lowest ripple if the input voltage is tightly regulated. The wide-range SVPL1209SG allows the isolated dc-dc converter stage to have a loosely regulated output, which may give a solution with better overall efficiency. This device also lets the designer use a single part number for multiple busses. This reduces the number of components that must be qualified, saves time and expense during audits, and reduces BoM parts count. Figure 3 shows typical efficiency curves for the SVPL3R312SG with a 5 V input voltage and a range of output voltages. 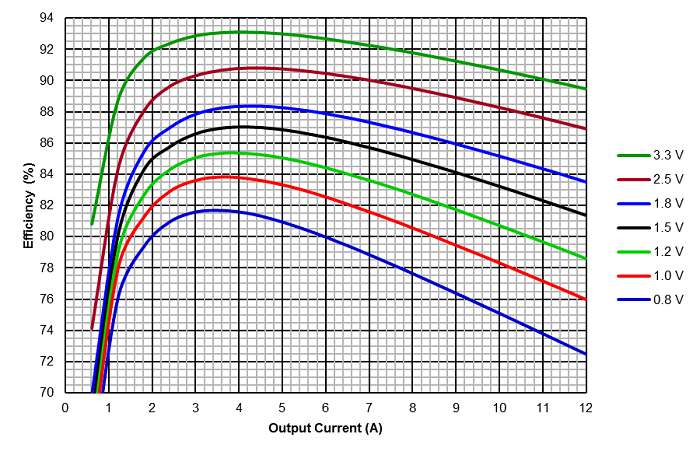 It’s important that the test data is applicable to the radiation environment of the intended application. All three parts are rated for TID up to 100 krad(Si), DD up to 1 x 1012 n/cm2, and SEE up to a linear energy transfer (LET) of 85 MeV-cm2/mg.

Single Event Transient (SET) performance is thoroughly characterized over many operating conditions, including capacitive load. Data is available upon request. This gives the hybrid part an advantage over a discrete design, which must be tested again each time a design change is made.

DC-DC converters designed for space use must maintain their performance for many years while operating under extreme conditions, including high levels of radiation. A new range of SMT DC-DC converters allows designers to increase efficiency and reduce system size by adding compact PoL converters to digital processing boards. These units manufactured by VPT meet the low-voltage, high-current requirements of the latest ASICs, FPGAs and DSPs.