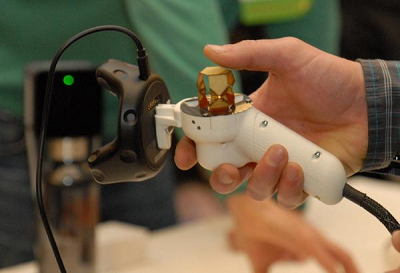 The tactile joystick developed by startup Foldaway Haptics brings the sense of touch to mobile devices, drones and, in a smaller version, to virtual reality controls. Source: EPFL a collision by vibration, or imitate acceleration by increasing the feeling of resistance. Recently developed systems are also bulky, expensive and not very portable. A newly engineered tactile joystick overcomes these barriers: the pocket-sized device can be set up or stowed in an instant.

The joystick developed by EPFL startup Foldaway Haptics brings the sense of touch to mobile devices, drones and, in a smaller version, to virtual reality controls. This low-power device plugs directly into a computer or mobile phone to add another dimension to the applications they run. The force feedback lets users feel the texture, stiffness and shape of virtual objects.

With the help of a small magnet, this ultralight device opens up into a joystick with an upward flick of the wrist. The joystick is less than two millimeters thick when folded flat, and is stable and solid thanks to its origami-like folding mechanism and the composite materials used in its construction.

Automated assembly is possible through a combination of thin layers of various materials already cut into the shape required for the folding mechanism to work. The layer-by-layer manufacturing process means that the system can be configured in different sizes and shapes. The researchers used this method to develop the Foldaway Touch, a retractable device that can be placed on VR joysticks. The device, which lets users handle a virtual object and feel its shape and texture with their thumb, earned the Best Demonstration Award at the IEEE Haptics Symposium in March 2018.