In a single hour, more energy from the sun hits the Earth than all the energy used by humans in an entire year. It would be amazing if humans could successfully harness solar power to meet humanity's energy needs. But this would have to be done in an economical, scalable and environmentally responsible way. This is a major challenge facing energy researchers in recent years. 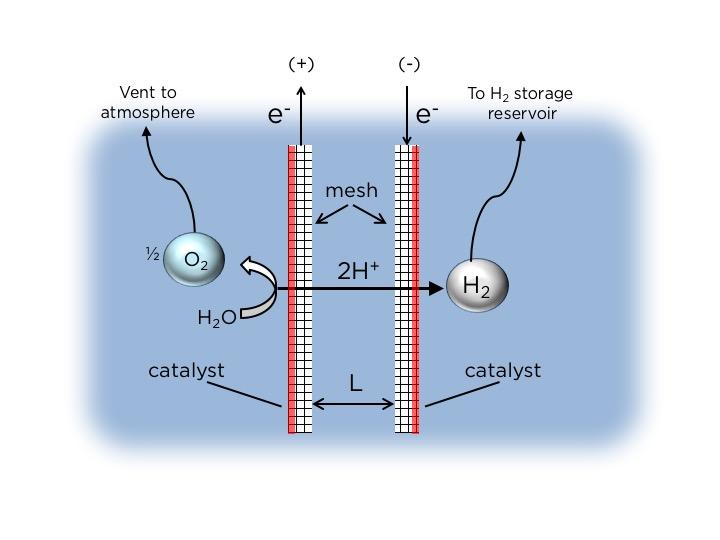 Two mesh electrodes are held at a narrow separation distance (L), and generate H2 and O2 gases concurrently. The key innovation is the asymmetric placement of the catalyst on the outward facing surfaces of the mesh, such that the generation of bubbles is constrained to this region. When the gas bubbles detach, their buoyancy causes them to float upward into separate collection chambers. Source: Daniel Esposito/Columbia Engineering

Daniel Esposito, assistant professor of chemical engineering at Columbia Engineering, has been studying water electrolysis, the splitting of water into oxygen and hydrogen fuel, as a way to convert electricity from solar photovoltaics, into storable hydrogen fuel.

Hydrogen is a clean fuel currently used by NASA’s Space Center to propel rockets into space. Researchers believe that hydrogen will play a supremely important role in a sustainable energy future. Most of today’s hydrogen is produced from natural gas through a process called steam methane reforming. This process simultaneously releases CO2, but water electrolysis uses electricity from solar PV and offers a promising route to produce H2 without any CO2 emissions.

The research team, led by Esposito, has developed a novel photovoltaic powered electrolysis device that can operate on a stand-alone platform that floats on open water. The floating PV-electrolyzer could be thought of as a “solar fuels rig” that bears some resemblance to deep-sea oil rigs. The only difference is, it would produce hydrogen fuel from sunlight and water, instead of extracting petroleum from the sea floor.

The key innovation was separating the H2 and O2 gases produced by water electrolysis. The electrolyzers use expensive membranes to maintain separation of the two gases. The Columbia Engineering device relies on a novel electrode configuration that allows the gases to be separated and collected using the buoyancy of bubbles in the water. The design allows efficient operation with high product purity without actively pumping the electrolyte. This is based on the concept of buoyancy-induced separation, the electrolyzer architecture produces H2 with purity as high at 99 percent.

"The simplicity of our PV-electrolyzer architecture, without a membrane or pumps, makes our design particularly attractive for its application to seawater electrolysis, thanks to its potential for low cost and higher durability compared to current devices that contain membranes," says Esposito. "We believe that our prototype is the first demonstration of a practical membrane-less floating PV-electrolyzer system, and could inspire large-scale 'solar fuels rigs' that could generate large quantities of H2 fuel from abundant sunlight and seawater without taking up any space on land or competing with fresh water for agricultural uses."

Commercial electrolyzer devices rely on a membrane to separate the electrodes from the device where the H2 and O2 gas is produced. Most of the research for electrolysis devices has been focused on devices that incorporate the membrane. The membranes are prone to degradation and failure. They require a high purity water source. Seawater contains impurities and microorganisms that destroy these membranes easily.

"Being able to safely demonstrate a device that can perform electrolysis without a membrane brings us another step closer to making seawater electrolysis possible," says Jack Davis, the paper's first author and a Ph.D. student working with Esposito. "These solar fuels generators are essentially artificial photosynthesis systems, doing the same thing that plants do with photosynthesis, so our device may open up all kinds of opportunities to generate clean, renewable energy."

Crucial to the operation of Esposito's PV-electrolyzer is a novel electrode configuration comprising mesh flow-through electrodes coated with a catalyst on only one side. The asymmetric electrodes promote the evolution of gaseous H2 and O2 products on the outer surfaces of the electrodes where the catalysts have been deposited. When the growing H2 and O2 bubbles are large enough, their buoyancy causes them to detach from the electrode surfaces and float upwards into separate overhead collection chambers.

The researchers used the Columbia clean room to deposit platinum electrocatalyst onto the mesh electrodes and 3D printers at the Columbia Makerspace to make most of the rector components. The used a high-speed video camera to monitor the transport of H2 and O2 bubbles between electrodes, called “crossover." Crossover between electrodes is undesirable because it decreases product purity, leading to safety concerns and the need for downstream separation units that make the process more expensive.

To monitor H2 and O2 crossover events, the researchers incorporated windows in all the electrolysis devices so they could take high-speed videos of gas bubble evolution from the electrodes while the device was operating. These videos were typically taken at a rate of 500 frames per second.

The team is refining their design for more efficient operation in real seawater, which poses additional challenges compared to the more ideal aqueous electrolytes used in their laboratory studies. They also plan to develop modular designs that they can use to build large, scaled-up systems.

"There are many possible technological solutions to achieve a sustainable energy future, but no one knows exactly what specific technology or combination of technologies will be the best to pursue," said Esposito. "We are especially excited about the potential of solar fuels technologies because of the tremendous amount of solar energy that is available. Our challenge is to find scalable and economical technologies that convert sunlight into a useful form of energy that can also be stored for times when the sun is not shining.”

The study on this research was published in the International Journal of Hydrogen Energy.