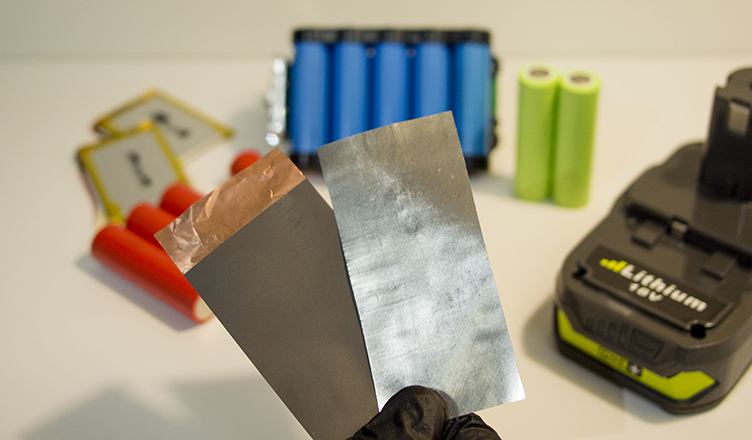 The development of a family of materials with the power to double the charge capacity of lithium-ion battery anodes is a breakthrough that could lead to cheaper, smaller and lighter batteries.

Researchers working on the materials at the Cockrell School of Engineering at University of Texas, Austin used a top-down production process in which eutectic metal alloys are mechanically rolled into nanostructured metal foils. The family of materials, dubbed the Interdigitated Eutectic Alloy (IdEA) anode, eschews the multiple steps traditionally required to mass-produce lithium-ion battery anodes.

“It is exciting to have developed an inexpensive, scalable process for making electrode nanomaterials,” said Arumugam Manthiram, mechanical engineering professor and director of the Texas Materials Institute. “Our results show that the material succeeds very well on the performance metrics needed to make a commercially viable advance in lithium-ion batteries.”

As published in the journal ACS Energy Letters, the foil material developed by the researchers is one-quarter of the thickness and half of the weight of the graphite and copper anodes used in virtually all lithium-ion batteries today. It’s a drastic simplification of the current manufacturing process for rechargeable lithium-ion batteries, which typically involves a graphite powder coated on a copper foil. The copper adds bulk to an electrode without improving power, and the complicated slurry coating process is laborious.

Postdoctoral fellow Karl Kreder, lead author of the study, realized that traditional metallurgical alloying processes could be used to transform a micrometer-scale alloy anode into a nanomaterial. “The eutectic microstructure forms naturally because of thermodynamics,” he explained. “Then, you can reduce the microstructure by rolling it, which is an extraordinarily cheap step to convert a microstructure into a nanostructure.”

The research was funded by a grant from the Division of Materials Sciences and Engineering at the U.S. Department of Energy’s Office of Basic Energy Sciences (BES). Future research will focus on streamlining the production process, as well as investigating anodes made from other alloys with even better performance capabilities.

“The IdEA anode is not just a single material, but rather represents a new framework for designing high-energy-density alloying anodes,” said Kreder. “There are at least 10 other novel binary systems that we know of, and we will continue to investigate.”