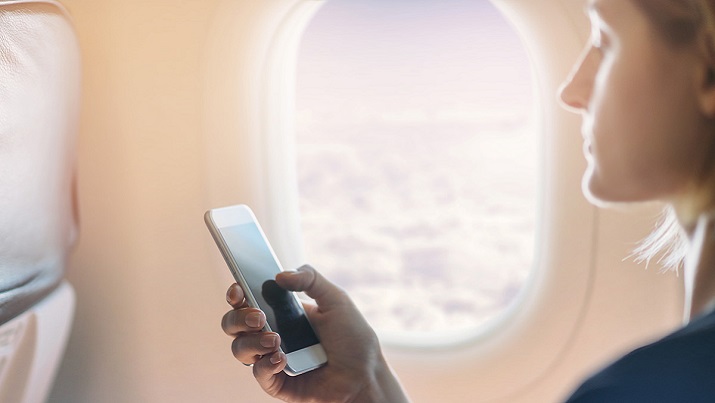 Source: fifeflyingfife/Adobe.Once upon a time, flying on an airplane necessitated a sort of forced vacation from the digital lifestyle and 24-hour connectedness many of us have come to rely upon. Most likely, your smartphone even has an “airplane mode” setting to disable all radio-frequency signal transmission. But these days, numerous airplanes offer in-flight Wi-Fi, enabling you to avoid “cutting the cord” even as you traverse the globe.

Well, sort of. The technology behind in-flight Wi-Fi is still in its nascent phase, and there are a number of challenges that cause it to be less than perfect.

The earliest systems to offer Wi-Fi on airplanes relied on satellites. They made use of the Ku band portion of the electromagnetic spectrum — named for its place within the obsolete, Cold War-era NATO “K band” designation (the “k” stands for kurz, which is German for “short”; the “u” means “under,” indicating the lower portion of the band). Systems like these began to be deployed in the early- to mid-2000s, and are still in use today. They work by beaming an internet connection from a satellite to a transponder attached to the plane, similar to the way in which rural communities use satellite dishes for online access. There’s even a dish-like, dome-shaped saucer on top of the plane that houses the antenna; it needs to be directed toward a transmitting satellite as the plane flies.

The speed of a Ku-band connection can be fast — in the neighborhood of 50 megabits per second (Mbps) — but speed is impacted by the number of people on the flight who are accessing the Wi-Fi connection, as well as the number of aircraft that are accessing the satellite. Another challenge is the bulkiness of the antenna itself — heavy enough to impact a plane’s weight and aerodynamics, its presence means higher fuel costs that are, not surprisingly, passed along to the consumer.

On the other side of the (electromagnetic) spectrum, airlines have recently begun to install antennas to reach the upper portion of the K band, known as Ka (“a” for “above”). Once used for military communications, Ka-band connections have the potential to reach Mbps speeds in the hundreds. However, there are currently many more Ku than Ka satellites — and achieving satellite coverage redundancy, possible only when there are more than enough satellites to go around, is particularly important over “hub” cities and areas of heavy aircraft conversation. There’s also the issue of “rain fade”: the higher the frequency used to transmit the signal, the more subject it is to attenuation by moisture in the air.

If you’re flying on budget air travel provider JetBlue, though, you might as well give their Ka-band connection “Fly-Fi” a try: Unlike many of the other offerings out there, the airline offers the service for free to all passengers on flights over the contiguous United States. The Ka-band network is also in the process of being expanded by communications providers such as ViaSat, based in California, and Inmarsat, based in London. 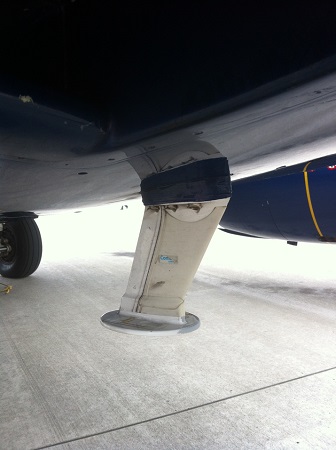 Gogo in-flight internet antenna. Source: MatthewLammers / CC BY-SA 3.0Another method for getting in-flight internet does not rely on satellites at all. Air-to-ground (ATG) transmission uses an antenna in the belly of the plane to connect to dedicated, ground-based cell tower antennas. This offers a much cheaper connection route, and, because of proximity, reduces the sort of latency issues that can plague satellite connections. But geography is a major drawback: Once you’re over the ocean, for instance, there are no cell towers to connect to. Users may also experience “hiccups” when the connection gets transferred from one tower to another; this is especially true where cell towers are more spread out, such as in rural areas. The connection can also be substantially slower — perhaps one-tenth of what’s possible via satellite.

However, ATG has made strides. A significant portion of its history involves Chicago-based Gogo, which grew out of aviation telephone service provider Aircell; the company was awarded an exclusive ATG broadband frequency license by the FCC in 2006. In 2012, Gogo launched ATG-4, adding two more antennas to the side of a plane’s airframe to increase connectivity with the ground. The company — which has also moved into the Ku-band satellite market with a thin-housing antenna solution called 2Ku — recently announced plans for a 2018 launch of a next-generation ATG network that will use unlicensed spectrum, promising speeds of 100 Mbps.

Bottom line, of course, is that what internet service providers promise and what the connected user actually experiences can be two very different things and, thanks to all the technological intricacies, this is perhaps especially true of in-flight Wi-Fi. Still, things have changed significantly over the past decade, and will likely continue to do so as long as the appetite for constant connectivity continues.

One thing that hasn’t changed, though, is the need for “airplane mode”: Connecting to Wi-Fi is allowed only at altitudes above 10,000 feet. During takeoff and landing, you need to hang up and let your pilot drive.