All earthquakes create two main types of waves. The P-wave (also known as the Primary or compressional wave), depending on the magnitude of the quake and the composition of rock layers, will generally travel at approximately 4 to 8 km/second. In comparison, the S-wave or shear wave, travels at roughly 60 percent of the P-wave’s speed, and is responsible for the violent shaking of a quake. The difference in timing of these waves is dependent upon several variables, such as how large a quake is as well as how shallow or deep it is. If shallow, for example, there are only a few seconds between both waves at short distances. 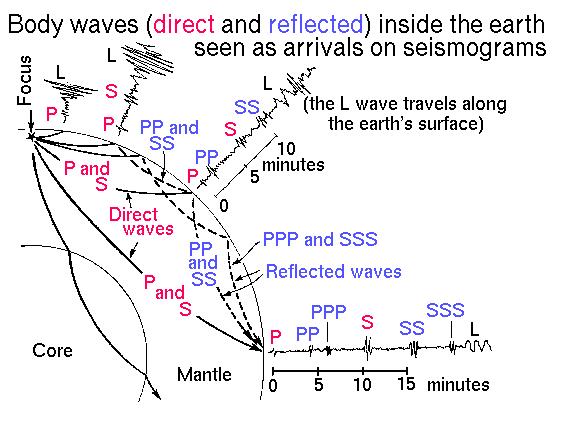 Figure 1: P (compressional) waves and S (shear) waves, and the relative time between them. The L wave indicated above represents the surface wave, which is the slowest of the three, and even though they eventually cause more damage than P and S waves, they are the third wave to reach seismographs and are not considered here. (Source: USGS Earthquake Hazards Program)

While we have all seen photos of the destruction potential of major earthquakes, much of it is caused by secondary incidents including explosions, gas leaks, water leaks, fires, and damage to bridges. In order to find a potential way to mitigate this secondary damage, information beyond the P and S waves typically used, is necessary.

Spectrum or spectral intensity (SI) is the use of the spectral velocity curve or a velocity response spectrum, integrated between periods of 0.1 to 2.5 seconds. SI is used as a means to ascertain the response of structures to ground motion. In areas prone to major earthquake activity, the SI value correlates closely, for example, with the seismic intensity scale of Japan rather than the use of maximum acceleration values. The seismic scale – used in Japan and Taiwan – measures earthquake seismic intensity, or the degree of shaking. The result of using SI is the ability to make judgments that accurately reflect structural damage. 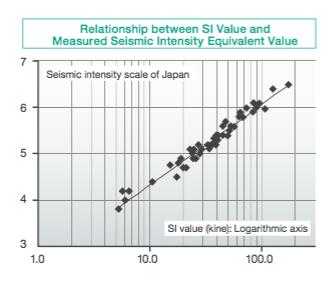 In response to the need to reduce secondary seismic damage, especially in the Internet of Things (IoT) and Industrial Internet of Things (IIoT) space, Omron expanded its vibration sensor portfolio to include the D7S. Omron is the first component company to create this application-specific earthquake detection device. The D7S is the world’s smallest class size and high-precision seismic sensor designed to be mounted inside a variety of devices. With I2C communication protocol the D7S can inform safety devices to activate or even communicate to a central utility location to shut down any gas, water or power lines.

FHere is a good look at the range of safety services performed by the D7S vibration sensor from Omron in the event of an earthquake.

The D7S features high-detection precision, and ultra-low power consumption through 3-axis acceleration sensors and a unique SI value calculation algorithm. At only 9.8 mm x 10.9 mm, the seismic sensor is easily embedded into a variety of devices. Fifty to 100 devices can be linked together in a network so that they communicate with a networked device, pinpointing the exact location of the earthquake epicenter.

In Japan, where earthquakes are both prevalent and severe, gas companies are adopting D7S sensors to rapidly detect quakes and shut down gas lines to prevent explosions and fires.

Given the two seismic P and S waves, once the sensors detect the S wave, information is provided to another device to automatically shut down hazardous equipment connections as appropriate, and also communicate to emergency services. The split seconds that may exist from detection of the S wave to damage is extremely important in delivering human, building and equipment safety.

Features of the D7S include:

The D7S features such components as a microprocessor that calculates the SI value from the sequence of acceleration data. The MPU also controls the D7S including I2C communications. An accelerometer reads the vibration and delivers the digital data to the MPU. A voltage regulator regulates the supply voltage. The D7S specification of input voltage is 3.3 - 5.0 V, however the MPU and accelerometer operate only under 3.3 V. The voltage regulator controls the input voltage into constant voltage 2.0 V. Finally, a capacitor reduces the electrical noise on the D7S.

There are a variety of applications for the D7S vibration sensor. It can prevent secondary damage in such industry segments as semiconductors, FPD, machine tools, control panels, incinerators and printers. The D7S can shut off and stop the operation of hazardous devices in chemical plants and distribution plants, as well as in homes and home appliances such as heaters, gas stoves and fire prevention systems. It is used in electricity meters, gas meters, expressways, bridges, tunnels and railroads.

OMRON’s D7S takes advantage of the interval from earthquake detection to the potential for severe damage. Given its small size, high performance, high-detection precision and ultra-low power consumption, this application-specific earthquake detection device enables companies and individuals to deal with the damage from the earthquake, but without the even-more hazardous secondary damage including fire and explosion.

This cost-effective solution is fast and easy to implement, taking advantage of the crucial seconds available that can be used for mitigation, and is the smallest high-precision seismic sensor available today.