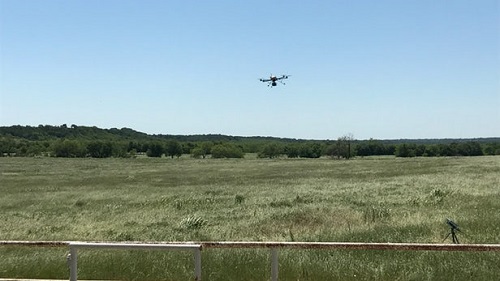 During such events, cellular networks are commonly knocked out or can be overloaded by the increased traffic of civilian communications. As a result, response and rescue operations carried out by disaster readiness agencies and emergency responders can be compromised if their own communications suffer from the decreased network bandwidth.

During a field test of the system, dubbed Aerial Deployable Communication System, researchers from UNT deployed the drone to an altitude of 400 ft. in remote Waxahachie, Texas. The drone proved capable of sustaining a cellular frequency that could be dedicated solely to emergency response and disaster relief communications, ensuring that relief efforts could be coordinated without worry.

According to Kamesh Namuduri, associate professor of electrical engineering, “The system, with just 250 milli watt transmit power, is capable of providing instant cellular coverage up to two kilometers during disaster relief operations. If the system is scaled with a 10 watt transmit power, the system can provide cellular coverage to the entire city of Denton, [Texas].”

Research in the ADCS drew numerous commercial and government project partners, and the initial results and drone will be on display at the 2017 Global City Teams Challenge Expo in Washington, D.C.

The ADCS is currently little more than a proof-of-concept, in current form. Multirotor drones, such as the one used in the experiment, have short flight times due to the use of multiple electric motors. To truly provide cellular coverage during a disaster, longer flight times are a requirement. The future of ADCS likely lies with a fixed-wing drone, or preferably, with a type of airship due to its static lift.