Chuck Heschmeyer
Intelligent systems designers in Switzerland have developed a bio-inspired strategy for making quadcopters and other drones resilient to collisions. 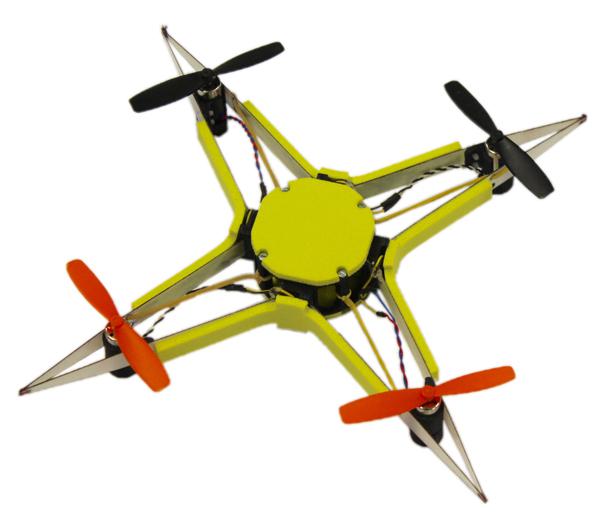 Crash-resistant quadcopter inspired by insect wings. Credit: EPFL Current crash-protection designs for unmanned aerial vehicles (UAVs), call for bulky protective cages or sensor technology to make them as unlikely to crash as possible. Now, robotics engineers from École Polytechnique Fédérale de Lausanne (EPFL) have demonstrated a new approach – a biomechanical strategy similar to how insect wings snap back after colliding with an object.

The EPFL quadcopter consists of a thin fiberglass external frame with four arms held together by four magnetic joints. The frame, only 0.3mm thick, is soft and flexible, making it able to withstand collisions without permanent deformation. The magnetic joints connect the frame to the central case, which is modeled after hard insect exoskeletons, and rigidly hold the frame in place during flight.

The magnets come into their own when they break off upon collision and the drone transitions to a soft state where the frame becomes disengaged and can safely deform without damaging itself or the inner core. Soft elastic bands ensure that the frame is held close enough in place that the magnets snap back after the collision, allowing the frame to realign and ensuring that the drone is once again ready to fly.

As demonstrated in this video, the crash-resistant drone was tested by dropping it from a height of 2m, or about 6.5 feet, whereby it completely disengaged the magnetic joints and automatically restored to its pre-crash configuration. In fact, researchers said the drone was dropped more than 50 times with no permanent damage.

The innovative design also allows it to have as many rotators as desired and is not limited to a four-rotor configuration.