Finally, Graphene is a Superconductor!

Since the discovery of graphene in 2004, the scientific community has been waiting to prove that, besides all other characteristics, it has the capability to be a superconductor. This material is a grid of two-dimensional carbon atoms arranged in a hexagonal structure, with extraordinary properties that could revolutionize the electronic industry, among others. Being a superconductor at room temperature would add to its unique properties. Until now, however, promoting the innate ability of graphene to act as a superconductor has been a failure. Superconductivity in graphene has been achieved only when the material is doped, as a typical semiconductor, or when placing it on a superconducting material.

This week, however, a team of researchers at the University of Cambridge in the UK have found a unique way to trigger superconductivity in its own right. This was achieved by coupling it with a material called praseodymium cerium copper oxide (PCCO). The research was led by Dr. Angelo Di Bernardo and Dr. Jason Robinson, Fellows at St John's College, University of Cambridge, alongside collaborators Professor Andrea Ferrari, from the Cambridge Graphene Centre; Professor Oded Millo, from the Hebrew University of Jerusalem and Professor Jacob Linder, at the Norwegian University of Science and Technology in Trondheim. 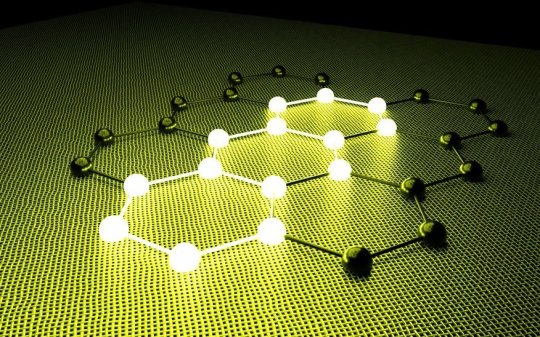 This research has not only proved the possibility of converting graphene into a superconductor, but it is also proof of the existence of a very unique and mysterious type of superconductivity called p-wave superconductivity that has evaded researchers for over 20 years.

PCCO is a copper oxide from an excellent class of superconductors called “cupprates.” Once the PCCO was coupled with graphene, the researchers, using scanning and tunneling microscopy, were able to distinguish the superconductivity coming from PCCO from the one produced by graphene. This was an important distinction. In a superconductor, electrons tend to form pairs and the spin alignment of the pair may be different depending on the superconductivity. In PCCO, that pairs’ spin state is a type known as a “d-wave state.”

“If p-wave superconductivity is indeed being created in graphene, graphene could be used as a scaffold for the creation and exploration of a whole new spectrum of superconducting devices for fundamental and applied research areas,” Robinson said. “Such experiments would necessarily lead to new science through a better understanding of p-wave superconductivity, and how it behaves in different devices and settings.”

The research was published in Nature Communications on January 19, 2017.

Re: Finally, Graphene is a Superconductor!
#1