Microsemi Corporation has expanded its Space System Manager (SSM) product family with the introduction of a radiation-tolerant motor controller that helps to reduce the weight and area in satellites and human-related space programs.

The LX7720 is a mixed-signal device that Microsemi claims reduces significantly the weight and board space in space-bound devices compared to conventional discrete motor control circuits. The device works with a field-programmable gate array (FPGA) and components also offered by Microsemi specifically designed for the space market. 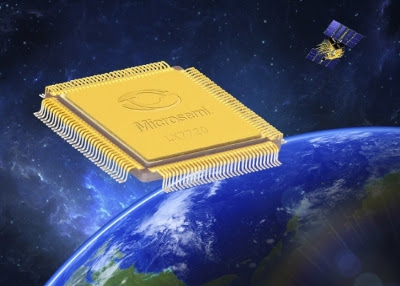 These applications serve on satellite busses for solar panel deployment and driving reaction wheels; on spacecraft payload instruments for multi-axis point mechanisms for antennas and laser terminals or for precise motion control of lenses, filters and mirrors; and in robotics applications such as pressure-sensitive motion control.

This is the second radiation-tolerant motor control device that Microsemi has introduced in an effort to get a slice of the new satellites that will be launched over the next decade. Euroconsult says 60% more satellites will be launched by 2024 than were launched in the past decade—driven by space-enabled countries replacing and expanding their in-orbit satellite systems and more countries launching their first satellite systems.