Chuck Heschmeyer
Researchers in Germany have succeeded for the first time in producing defect-free graphene directly from graphite. They say the method is both low cost and efficient, and enables high-quality graphene to be cut without causing defects, making the material much more valuable to the semiconductor industry. 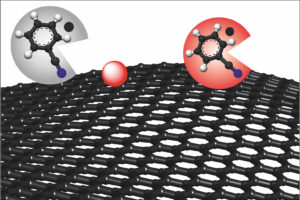 In the chemical production of graphene, benzonitrile (grey circle) removes the causes of possible defects and turns red, resulting in defect-free graphene (red circle). Source: Philipp Vecera/FAU Graphene is two dimensional and consists of a single layer of carbon atoms. It is transparent and flexible, yet strong and particularly good at conducting electricity and heat. Graphene’s unique properties make it suitable for use in a wide range of pioneering applications, such as in transparent electrodes for flexible displays.

However its usefulness to the semiconductor industry will be limited until the material’s properties—such as size, area and number of defects, which influences its conductivity—can be improved during synthesis.

Now a team of chemists at Germany’s Friedrich-Alexander-Universität, FAU, has discovered a method to produce defect-free graphene directly from a solution using the additive benzonitrile.

A common way to synthesize graphene is through chemical exfoliation of graphite. In this process, as explained by researchers, metal ions are embedded in graphite, which is made of carbon, resulting in what is known as an intercalation compound. The individual layers of carbon—the graphene—are separated using solvents. The stabilized graphene then has to be separated from the solvent and re-oxidized. However, defects in the individual layers of carbon, such as hydration and oxidation of carbon atoms in the lattice, can occur during this process.

By adding the solvent benzonitrile, researchers discovered that the graphene can be removed without any additional functional groups forming—and it remains defect-free.

The method, they say, is low cost and efficient, and also comes with another advantage. The reduced benzonitrile molecule formed during the reaction turns red as long as it does not come into contact with oxygen or water. This change in color allows the number of charge carriers in the system to be easily determined through absorption measurements. Previously this could only be done by measuring voltage, and now it gives graphene and battery researchers a new way of measuring the charge state.