Sales of electric vehicles (EVs) are on the rise rapidly throughout the world. This is the result of lowered costs of these cars, extended range of the vehicles, and barriers to consumers being reduced, according to a new report from the International Energy Agency (IEA), an organization of 29 member countries that works to promote affordable and clean energy.

In 2015, the number of global EVs on the road crossed the one million threshold, specifically amounting to 1.26 million cars. In 2014, only about half of this number of EVs existed, and in 2005 the number of electric cars was still measured in the hundreds. 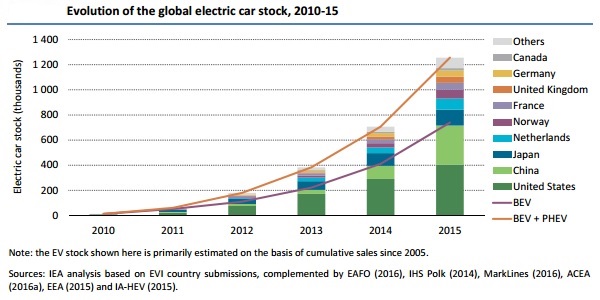 In 2015, 1.26 million electric vehicles were on the road worldwide, and seven countries eclipsed the 1% mark of all vehicles currently available. Source: IEA After being measured at or below 1% of all existing cars on the road for the past 10 years, in 2015 market share for EVs rose above this level in seven countries, including Norway, the Netherlands, Sweden, Denmark, France, China and the U.K. EVs on the road in Norway reached 23% of all cars, and 10% of all cars in the Netherlands, IEA says.

The rise in EVs on the road has also given rise to publicly accessible charging development from both direct investment and public-private partnerships. These partnerships are happening in both urban areas and beyond with the goal to enable long-distance travel.

While charging stations have increased, there is still work to be done, IEA says. Battery costs have been cut by a factor of four since 2008 and are continuing to decline, but the IEA says battery energy density needs to increase in order to enable longer ranges for lower prices. Prices of EVs also need to decline further in order to reach parity with conventional internal combustion engines. Recent announcements by automotive OEMs such as Tesla Motors, Ford, Chevy and others that soon EVs will be launched with the capability to exceed 200 miles in distance is a step in the right direction, the organization says.

The Future of Transport Systems

Electrification of consumer automobiles is just one area that is growing. The rise of public transportation vehicles—such as buses, freight delivery vehicles and two-wheelers—is also growing. China currently has 200 million electric two-wheelers on the market, making it the global leader in the market. It is using these vehicles as a way to decrease local pollution. China also is leading the charge with the deployment of electric bus fleets, with 170,000 buses already in circulation.

IEA believes the future of a sustainable transport system is in electric vehicles, especially as urban structures look to meet sustainability targets. This is also a way to save costs to a city by reducing its dependency on oil.

IEA says that if 150 million electric cars are on the road by 2030, there is a 50% chance of limiting average global temperature increase to two degrees Celsius. To reach these targets implies the number of sales of EVs will have to substantially increase in the coming years as will the deployment of electric two-wheelers beyond the Chinese market, the organization says.