The idea of uniquely identifying individual parts, assemblies and systems–such as in the electronics industry–gained attention to trace defective products from parts suppliers to final assemblies and to identify the source of faulty or counterfeit components and process problems, correction of which could prevent future failures. Military and government agencies in particular demand perfect traceability for systems that can remain in service for decades.

From Whence They Came

One-dimensional bar codes originally emerged to measure sales and track inventories in warehouses and retail establishments in real time. But bar codes suffer from two significant drawbacks: they offer meager storage capacity, and although a reader (usually a laser scanner that distinguishes between black and white bars) can detect a bad read, correcting it requires human intervention. Even disoriented and misplaced codes often give unsatisfactory results, and the reader itself contains moving parts tha 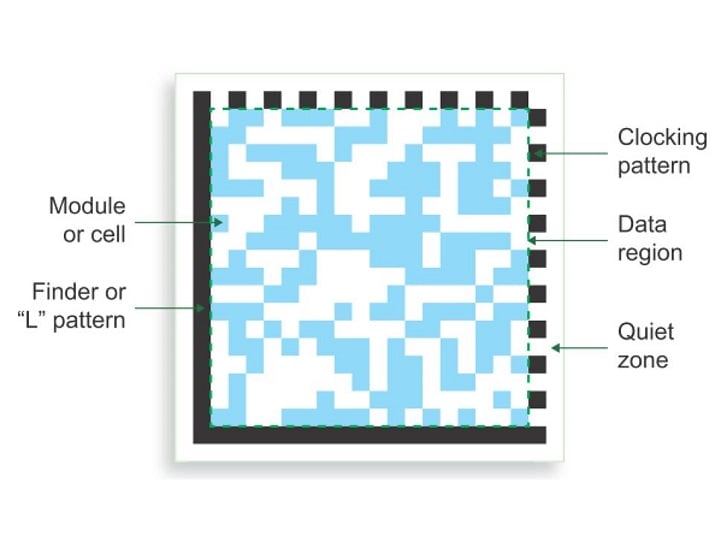 Structure of a 2D DataMatrix code (Source: Cognex)t can suffer mechanical failures. This combination of factors led to development of two-dimensional codes that carry more information and allow correction as well as detecting misread codes at least most of the time. A two-dimensional code can contain such information as part number, serial number, revision number, test-program name and revision number and a great deal more if needed. As a side benefit, codes on printed-circuit boards containing field-programmable gate arrays (FPGAs) could allow programming devices on the fly after board assembly, minimizing the chance that obsolete versions find their way onto products during manufacturing. Of the proposed 2D alternatives, the DataMatrix code has emerged as the accepted standard for the electronics and other manufacturing industries.

A DataMatrix code consists of a quiet zone that separates it from its surroundings, a “finder” or “L” pattern that allows reading software to orient the code correctly, a clocking pattern of black and white cells that define the size of the 1s and 0s in the code, and a data region. In addition to the raw data, the data region includes Reed-Solomon error-correction, the same algorithm that allows a CD or DVD player to compensate for scratches or other impediments to playing the content cleanly.

Two dimensional codes require vision-based readers, rather than the laser scanners of the bar-code world. This type of reader has no moving parts, dramatically improving its reliability. A camera takes a picture of the code, and the accompanying software finds the code in the image, orients it correctly, and extracts the information. 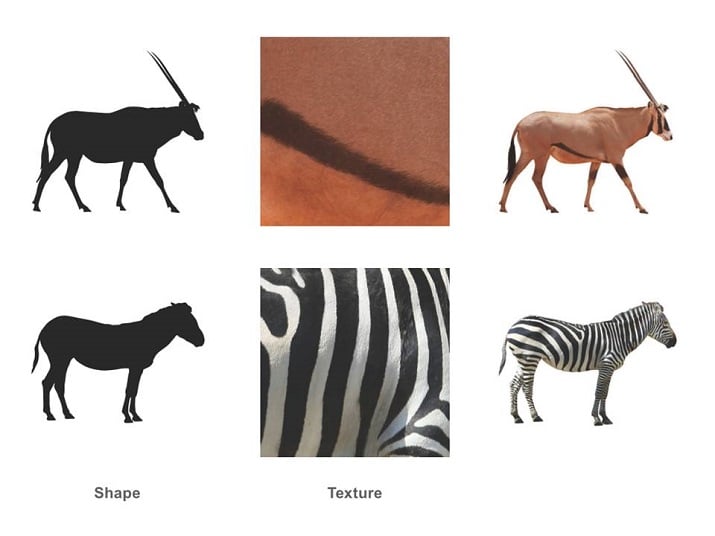 Identification from both shape and textural cues (Source: Cognex)

Most readers rely on shape-based algorithms to find, orient, and interpret the code. But if something obscures the quiet zone, “L” pattern, or clocking pattern–other nearby graphics or possibly components or circuit traces on a PCB, for example–the reader may not have enough information to find and interpret the data. Further processing requires human intervention. To extend the success rate, engineers at Cognex have created a software technology called PowerGrid that takes advantage of both shape-based and texture-based algorithms.

Consider the zoological analogy illustrated in Figure 2. The shape of the first animal clearly identifies it as an antelope. The second animal’s shape, however, proves less definitive. It could be depict a horse or any horse-like relative. Using a small square of the silhouette, recognizing either animal proves far more difficult. But looking at texture easily confirms that the second animal is a zebra. If the quiet zone, “L” pattern, and clock pattern are sufficiently legible, PowerGrid easily identifies and positions the code based on its shape and can analyze the data. If that search fails, the technique looks for texture that resembles data elements, determines the data margins from other hints in the field, such as legible remnants of the shape factors and reconstructs the pattern from the inside out, dramatically increasing the success rate, reducing manufacturing costs and providing a considerable boost to the company’s bottom line.