For many years energy-storage researchers have been trying to create battery anodes using silicon as the main material. For high-energy batteries, a high-capacity anode material is extremely important for performance. These days the most advanced batteries are based on alkali metals, in particular lithium, a material with good reducing and conducting, among other good properties. Lithium-ion batteries operate by moving ions and electrons back and forth between the anode and the cathode, as in the following chemical equation. When charging, the lithium ions move from cathode to anode; when discharging and applying voltage to a device the process is reversed, and the ions move from anode to cathode.

Silicon stores ten times more energy per charge, but it is not an optimal material as silicon particles are prone to swelling, shattering and cracking during the charging process, which inhibits conductivity. Furthermore, silicon reacts with the existing battery electrolyte to form a coating that diminishes its performance and ability to provide charges. If a method is devised to keep the pieces of the cracked particle together or close by, even after cracking, then the conductivity of silicon can be preserved.

Just recently a team of scientists reported a solution to this problem. Researchers at Stanford University and at the Department of Energy’s Stanford Linear Accelerator Center (SLAC) National Accelerator Laboratory developed a method to wrap each silicon anode particle in a “custom cage” made of graphene, an excellent conductor of electricity and the strongest material ever created. The graphene cages require certain properties—big enough to let the silicon nanoparticles expand during charging, but tight enough to contain the silicon nanoparticles when they break apart. In addition, the cages have to block chemical reactions with the electrolyte.

“In testing, the graphene cages actually enhanced the electrical conductivity of the particles and provided high-charge capacity, chemical stability and efficiency," said Yi Cui, the lead researcher and associate professor at SLAC and Stanford. “The method can be applied to other electrode materials, too, making energy-dense, low-cost battery materials a realistic possibility.”

The graphene cage fabrication method is detailed in a report published in Nature Energy in January 2016. The method consists of three steps. First, the researchers coated the silicon particles with nickel, an easy step because techniques exist to apply nickel in any thickness. During the second step, layers of graphene were grown over the nickel. This process is also simple because nickel acts as a catalyst to promote graphene growth. The third step consisted of etching the nickel away, leaving a space between the nanoparticles and the graphene for the silicon particles to expand.

"Researchers have tried a number of other coatings for silicon anodes, but they all reduced the anode's efficiency," said Stanford postdoctoral researcher Kai Yan, who carried out the experiments with graduate student Yuzhang Li. "The form-fitting graphene cages are the first coating that maintains high efficiency, and the reactions can be carried out at relatively low temperatures."

The following pictograph explains the process. 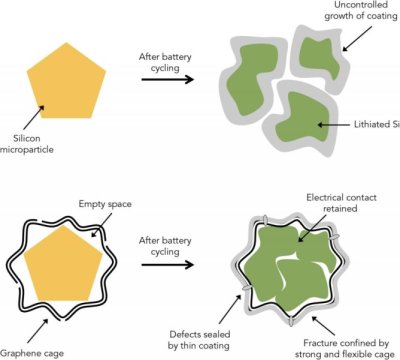 When used in lithium-ion battery anodes, silicon micro-particles swell, break apart and react with the battery's electrolyte to form a thick coating that saps the anode's performance. To address these problems, scientists built a graphene cage around each particle bottom. The cage gives the particle room to swell during charging, holds its pieces together when it breaks apart, controls the growth of the coating and preserves electrical conductivity and performance. (Credit: Y. Li et al., Nature Energy)