In the first nine months of 2015, global photovoltaic (PV) inverter shipments have increased 35%. However, the trouble is that during this same time, prices have fallen by as much as 26% to $0.12 per watt causing concern over long-term pricing of these energy devices, according to a new report from IHS.

In the fourth quarter, IHS forecasts 20 gigawatts (GW) of inverters will ship leading to an overall year-over-year revenue growth reaching $6.9 billion. But with increased competition between China, the U.S. and other key growth markets mixed with stagnate growth in Japan and Germany have caused prices to plummet. 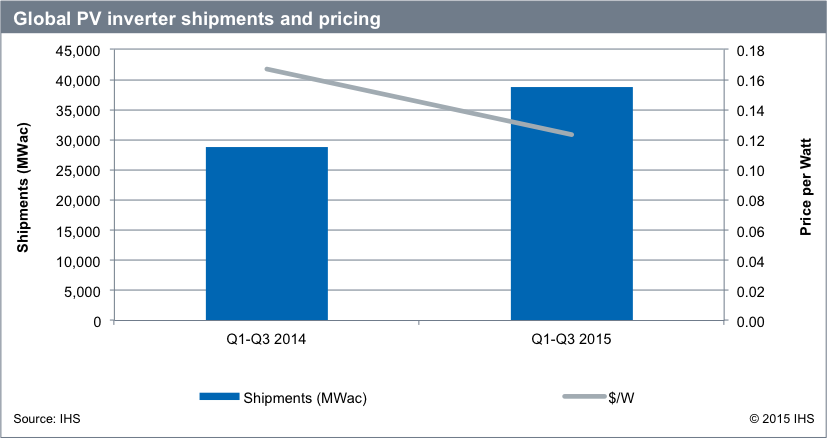 While PV inverter shipments increased 35% in the first nine months of 2015, prices fell 26%. Source: IHS.“The shift to utility-scale installations is changing the product mix and causing prices to fall,” says Cormac Gilligan, senior analyst for the solar supply chain at IHS. “For example in the United States lower-priced large central inverters will account for an increasing share of inverter shipments over the next 15 months.”

Competition from China is rising due to the result of an acceptance of Chinese inverters in recent years with buyers noting the region is offering acceptable levels of quality in inverters compared to just a few years ago. That acceptance of lower-cost Chinese suppliers is contributing to the price pressure in the inverter industry.

Gilligan says despite this acceptance, Chinese companies must still offer competitive pricing to be considered by customers in new markets.

“Inverter buyers are concerned that Chinese inverters suppliers offer inadequate technical support and after-sales service,” Gilligan says. “As more customers realize Chinese inverters offer acceptable levels of quality, it is only a matter of time before they are selected as preferred suppliers by some of the leading solar lease suppliers and companies offering EPC services in the United States; however, while Chinese inverters are gaining acceptance, SMA Solar Technology was still the top brand globally for the fourth consecutive year.”