This month a team from the University of Michigan (UM) will use IBM’s advanced solar forecasting technology to power its solar car in a 1,800-mile race across the Australian Outback. 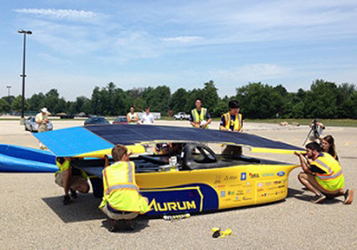 University of Michigan students are collaborating with IBM to use cognitive solar forecasting technology to predict solar radiation and cloud movement during the 2015 race. Image credit: IBMThe car is solely powered by solar energy, which requires more accurate forecasts for the UM students in the Bridgestone World Solar Challenge race to decide how to drive their car more efficiently and improve their chances for winning.

Cognitive computing expertise will provide the team real-time insights into conditions such as cloud cover and wind patterns as well as determine how much solar power will be available to fuel their car along the course race.

Most current forecasting techniques rely on individual weather models, which offer a less comprehensive view of the variables affecting the availability of renewable solar energy.

The team will leverage two kinds of forecasts. One technique enables the students to obtain more accurate forecasts on the race route two or three days ahead through machine learning that takes in a large amount of historical data as well as data gathered along the race course.

The second forecasting technique involves a sky camera mounted on the hood of two scout cars that run a few minutes to one hour ahead of the Aurum team car. With the system plotting the location and the transparency of clouds, the team can decide the speed of the car to maximize solar energy input. Simulations have shown that this technique could gain the team up to 15 minutes per day, according to UM.

“We are using physical analytics to combine our understanding of the physical world with two of the most exciting fields in computer science—data analytics and machine learning—which will lead to new innovations that can transform industries,” says Dario Gil, vice president of Science and Technology, IBM Research.

IBM developed the technology through a program supported by the U.S. Department of Energy’s SunShot Initiative. By using state-of-art machine learning and other cognitive computing technologies, IBM scientists can generate solar and wind forecasts that are up to 30% more accurate than the ones created using conventional approaches, whether minutes or days in advance, according to IBM.

“The University of Michigan has been competing in solar car races for 25 years,” says Pavan Naik, program manager for the UM Solar Car Team. “This year, IBM’s solar forecasting technology will allow us to know where the clouds are, where they are going, and where we should go faster in order to chase the sun.”

The collaboration with the UM Solar Car Team provides IBM improved forecasting techniques for the use of an alternative solar energy source used by industries that are susceptible to the impact of weather on operations and how they conduct their business, according to IBM.

More on IBM and the UM Solar Car Team here: http://ibm.co/solarforecasting and http://umicheng.in/solar25

Bridgestone World Solar Challenge is the crossing of Australia by 46 teams from 25 countries starting October 18: www.worldsolarchallenge.org.