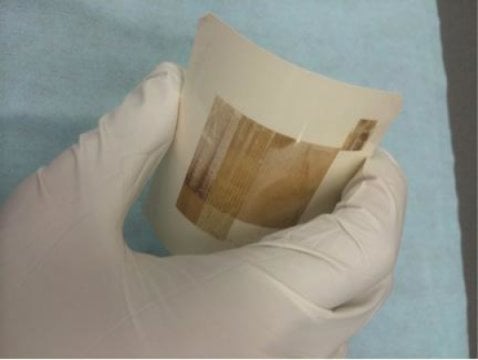 Researchers from Delft University of Technology in the Netherlands have developed a method that allows silicon ink in polycrystalline form to be printed on a substrate, a breakthrough that could open the door for future flexible electronic devices.

Printable electronic devices are of great interest to the electronics industry due to their simplicity and relatively low cost to manufacture. In comparison, standard methods of fabrication require complicated processes such as photolithography, etching, deposition and other techniques, most of which are supported by vacuum systems.

Printable electronics use semiconductor materials printed as ink on many types of substrates. These methods allow for the fabrication of flexible circuits such as rollable displays or flexible sensors. The semiconductor materials normally used are organic and metal-oxide semiconductors; however, these semiconductors lack the reliability and charge-carrier mobility of silicon, as well as many of its electronic properties. Until now, there have been few successes in the use of silicon as an ink printed on a substrate. Printing silicon on a substrate requires a 350 C thermal annealing process, a temperature far too high for many flexible surfaces.

"It was very simple," says Ryoichi Ishihara, the professor who led the research team, which included collaborators at the Japan Advanced Institute of Science and Technology in Ishikawa, Japan. "We coated liquid polysilane directly on paper by doctor-blading, or skimming it by a blade directly in an oxygen-free environment. Then we annealed the layer with an excimer-laser [a conventional tool used for manufacturing smartphone displays]. And it worked," Ishihara said.

The laser blast lasted a few nanoseconds without damaging the substrate, and the thin film transistors that were formed exhibited electron mobility comparable to transistors manufactured with conventional methods. An immediate application of this method is in wearable electronics, due to the low cost of production.

"The process can be expanded to biomedical sensor and solar-cell areas and will also realize stretchable--and even edible--electronics," Ishihara says.

The research results were published in the journal Applied Physics Letters.