University researchers have developed a paper-like material for lithium-ion batteries that has the potential to boost by several times the specific energy—or amount of energy—that can be delivered by the battery. The new material produced by researchers at the University of California-Riverside's Bourns College of Engineering is composed of sponge-like silicon nanofibers.

The research team used a technique known as electrospinning, in which 20,000 to 40,000 volts are applied between a rotating drum and a nozzle to emit a chemical compound. The compound is composed mainly of tetraethyl orthosilicate (TEOS), frequently used in the semiconductor industry. The nanofibers are then exposed to magnesium vapor to produce the sponge-like silicon fiber structure.

The material could be used in batteries for electric vehicles (EVs) and personal electronics, according to the researchers.

Conventionally produced lithium-ion battery anodes are made using copper foil coated with a mixture of graphite, a conductive additive and a polymer binder. However, the performance of graphite has been nearly tapped out, according to the UC Riverside researchers, so they are experimenting with silicon, which has a specific capacity that is nearly 10 times higher than graphite.

Silicon has a downside: it suffers from significant volume expansion, which can quickly degrade the battery. The silicon nanofiber structure created in the lab of Mihri Ozkan, a professor of electrical and computer engineering at UC Riverside, circumvents this issue and allows the battery to be cycled hundreds of times without significant degradation, according to the researchers. The researchers contend that eliminating the need for metal current collectors and inactive polymer binders while switching to an energy dense material such as silicon will significantly boost the range capabilities of electric vehicles.

Free-standing materials grown using chemical vapor deposition, such as carbon nanotubes or silicon nanowires, can only be produced in very small quantities (micrograms). By contrast, the UC Riverside researchers were able to produce several grams of silicon nanofibers at a time even at the lab scale. 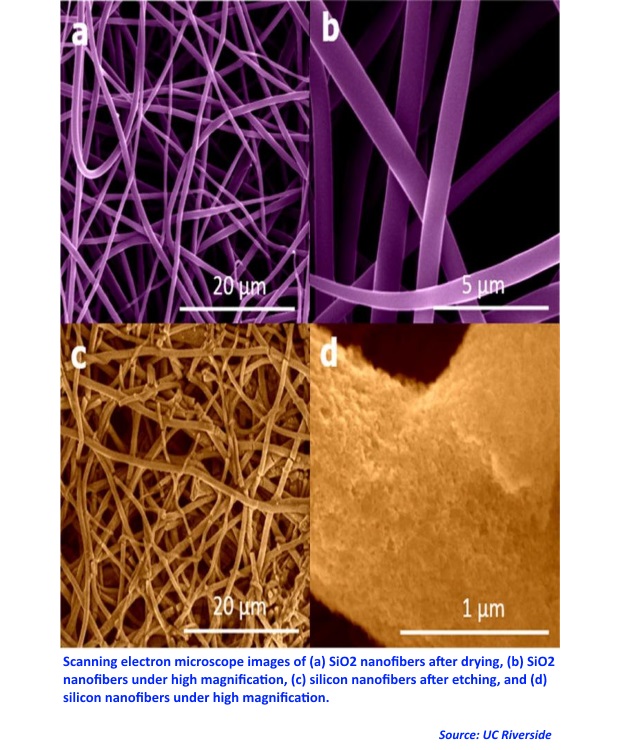 The researchers’ next step is to implement the silicon nanofibers into a pouch cell format lithium-ion battery, which is still a larger scale battery format that can be used in EVs and portable electronics.

The UC Riverside Office of Technology Commercialization has filed patents for inventions reported in the research paper. The paper, "Towards Scalable Binderless Electrodes: Carbon Coated Silicon Nanofiber Paper via Mg Reduction of Electrospun SiO2 Nanofibers," has been published in the journal Nature Scientific Reports. The research was supported by Temiz Energy Technologies.

The paper describing the research was authored by Mihri Ozkan along with Cengiz S. Ozkan, a professor of mechanical engineering, and six of their graduate students: Zach Favors, Hamed Hosseini Bay, Zafer Mutlu, Kazi Ahmed, Robert Ionescu and Rachel Ye.