Mouser Electronics Inc. (Mansfield, Texas) is now distributing the MN101L 8-bit microcontroller from Panasonic, which is said to be the first MCU that uses non-volatile resistive RAM (ReRAM) as its internal memory.

Panasonic has been discussing its use of ReRAM since 2012 but such is the novel nature of the technology that the company has engaged what might be termed a "soft launch." Pansonic, like many Japanese chip companies, has also been undergoing a transition and having disposed a number of wafer fabs to a joint venture with Tower Semiconductor Ltd. (Migdal Haemek, Israel), the company is expected to merge its logic chip business with that of Fujitsu Ltd.

The MN101L, based on the AM13L processing core which appears to be proprietory, includes 64-kbyes of ReRAM divided between 62-kbytes of program and 2-kbytes of data memory. The claim made for the memory is that it offers five times the write speed of flash or EEPROM memory without the need for an erase cycle. This in turn allows programs to finish quicker and the MCU to return to being switched off and longer operational times in battery powered devices. 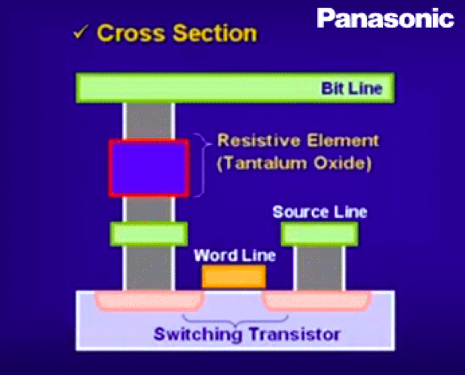 The program ReRAM has an endurance of 1K write cycles while the ReRAM used as data memory is rated at up to 100K write cycles. Data retention is 10 years. The arrangement is an alternative to MCU plus non-volatile ferroelectric memory being offered by some companies, including Fujitsu Semiconductor.

The manufacturing process is not declared but it is not likely to be at the leading-edge of what is possible because of the need and Panasonic appears to have trimmed the design from an earlier version that had 128-kbytes of on-chip ReRAM.

Panasonic's ReRAM is based on changing the resistance in a thin film of tantalum oxide between tungsten plugs. Many metal-oxide ReRAM schemes are being researched by numerous companies but very few have yet come to market either in stand-alone or embedded form.

The MN101L uses a 10MHz 8-bit microcontroller core has a three-stage pipeline and includes a 16x16 multiply, 32/16 divide, real-time clock, ADC and LCD controller. The datasheet is dated April 2014.