How long will you spend in the metaverse? 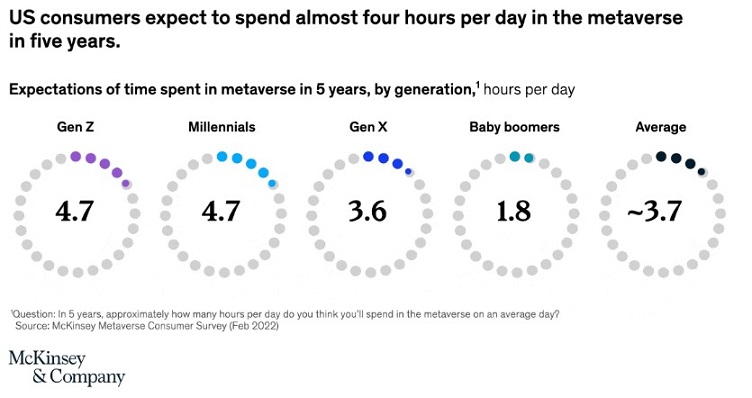 Consumers surveyed in the U.S. expect to spend about four hours or more in the metaverse with younger generations spending more time. Source: McKinsey

While there is still quite a bit of confusion and ambiguity among consumers regarding the metaverse, a new survey suggests that many consumers expect to spend quite a bit of time inside the virtual realm.

The survey, conducted by McKinsey & Company, found that a majority of consumers know and engage in some form of the metaverse and expect it to become a significant part of their lives. In fact, it could be as much as four hours a day spent in the virtual realm over the next five years.

What is the metaverse?

Surprisingly, according to the McKinsey survey, about 55% of consumers are familiar enough with the metaverse to describe it. And nearly 30% of those surveyed said they had used the metaverse or played at least one metaverse game.

The metaverse isn’t necessarily a new thing but more of an extension of technology that has already been available for some years. The term describes an interactive and connected experience that merges both augmented reality (AR) and virtual reality (VR) into a new type of experience called extended reality (XR).

While the metaverse and blockchain are not the same technology and the metaverse does not have to be built on blockchain tech, the functions and transactions conducted in the metaverse require a high level of security and speed, which could probably best be served by blockchain.

Currently, the metaverse in gaming is used in AR and VR games and content. In sports, the metaverse is being used to offer a new way of watching matches or events, giving users a sense of being on the field or very close to the action that witnessing in person or on a television doesn’t offer. In fashion, AR and VR is being used to show how an outfit or an accessory could look on a person without physically touching the item. Ralph Lauren, Gucci, Tommy Hilfiger, Nike and Fendi have all launched initiatives in the metaverse. 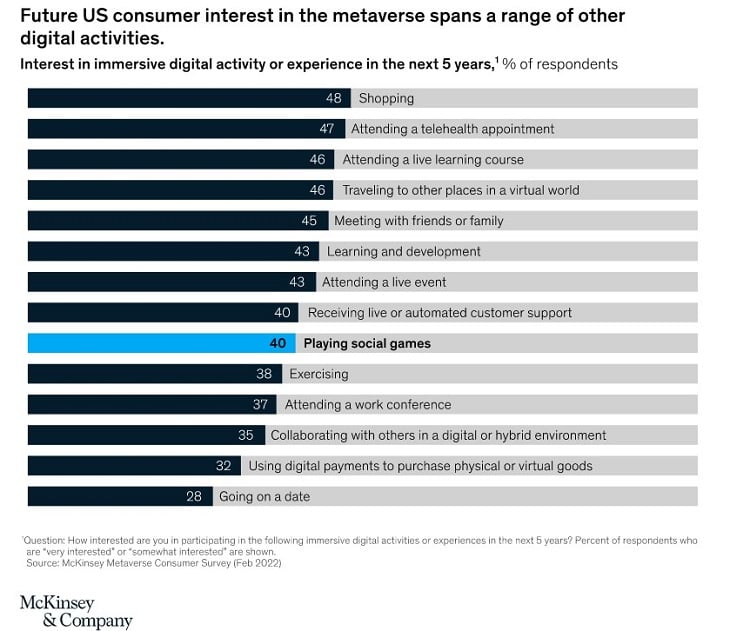 While gaming is currently the largest sector for the metaverse, consumers expect to use the technology for other things in the next five years including shopping, attending live events or learning and development. Source: McKinsey

Depending on who is asked, the metaverse may just be the latest craze or a trend that will eventually be replaced by something else. The flip side of this coin is that the metaverse is the future of fashion, gaming, shopping, industry and more.

The McKinsey survey found that the transition from online to immersive metaverse is not just already happening but more than 20% of those surveyed expect to spend more time online exercising, working, reading and shopping in the future. About 10% of those surveyed have tried AR or metaverse dating and enjoyed it as a real-life alternative.

On average, those surveyed expected to spend about four hours in the metaverse daily but for Generation Z and millennials this increases to five hours per day while older generations would spend just a few hours per day, according to the McKinsey survey.

Not just for gamers

The survey found that many consumers already use the metaverse for playing games such as “Roblox,” “Minecraft” and “Animal Crossing.” The gaming industry is pushing more immersive and interactive experiences as well, so it is likely gaming will be one of the cornerstones of the metaverse at least initially.

However, according to the McKinsey survey, consumers are also looking at using the metaverse for entertainment and shopping. About one in five respondents said they had already attended a virtual live event such as a concert or film festival.

Other popular interests for the metaverse include booking, learning, traveling, socializing and more with gaming being well down the list, the survey said.

The full research can be found in McKinsey’s Probing reality and myth in the metaverse report.