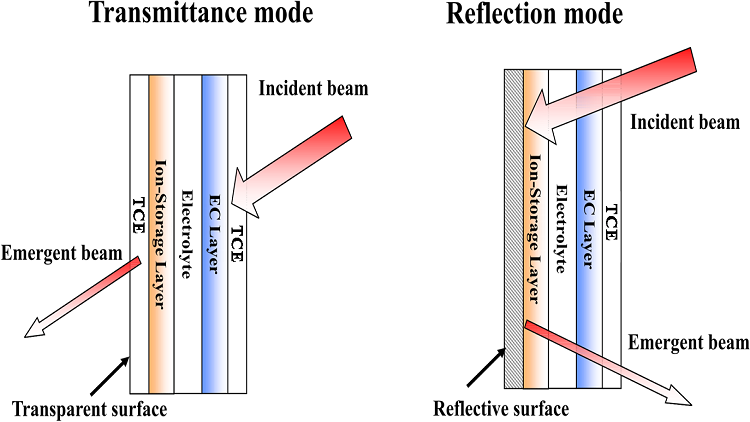 Technological advances often coincide with adverse consequences, including pollution, global warming and the depletion of fossil resources, among others. As a result, improving energy efficiency and conserving resources are key and require development of new materials to support deployment of new technologies and "smart" materials. Functional materials are influenced by their properties and initial state, in addition to the external forces and energy given to them.

Smart materials exhibit many functional states that alter over time as per the impacting impulse. Electrochromic (EC) materials are substances that can alter color when exposed to an electric field. These substances are of tremendous importance, both scientifically and in terms of their uses in many technical areas, such as the foundation of low-power and flexible electrochromic devices (ECDs), for example, reflective blinds, displays, smart windows, sensors and different reflection mirrors. The primary goal of ECDs is to shield against visible light (wavelengths of 380 nm to 780 nm). These devices consist of an electrochromic coating in the shape of a counter electrode positioned among transparent conductive electrodes (TCEs) in an electrolyte and an EC film. The basis of ECD operation is the modulation of the coefficient of light reflection/transmission and the conversion of optical light flux, resulting in an electrochemical reaction.

Robotics, soft electronics and wearable technologies have stimulated the growth of ECDs in a variety of form factors, and a number of adaptable EC technologies have been designed to meet the needs of these various applications. Traditional rigid ECDs have attained exceptional cycling stability, paving the way for commercialization of the technology. However, the transition from rigid to flexible ECDs necessitates a switch in the substrate from traditional indium tin oxide/fluorine tin oxide (ITO/FTO) glass to new types of flexible TCEs. ITO/polyethylene terephthalate film (PET) substrate is a common choice since PET substrate is very flexible and transparent.

TCEs made of alternative substrates, like silver (Ag)/PET, can also be used in flexible EC applications. In Ag conductive grids assembled on their own on PET substrate, tungsten trioxide nanoparticles have been inkjet-printed, allowing for EC patterning. While the mechanical qualities of ITO or FTO-based TCE are its Achilles' heel, the weaknesses of Ag-based TCE for electrochromic applications due to its electrochemical instabilities must not be overlooked. This could be deleterious to cyclic stability.

Challenges in the realization of flexible ECDs

The manufacturing of stable electrodes is one of the most difficult aspects of flexible ECDs. When fusing the printed nanoparticle inks, one common concern is the creation of cracks, which can reduce conductivity. This is due to the considerable volume reduction that occurs when organic surfactants are removed, resulting in a denser structure. Another difficulty is the flexo-printed Ag hexagonal grid-based sluggish kinetics and inhomogeneous switching, which generate a blooming effect during coloring. This is due to variations in surface resistance, which results in a faster switching reaction in areas next to the Ag grid lines. To address this problem, a conductive PEDOT: PSS layer may be applied to the Ag grids to homogenize the electric field distribution in the ECDs to preventing blooming and uniform coloring.

It is critical for metal-based TCE to have a passivation layer over the surface of the metals to avoid oxidation and corrosion. This challenge can be addressed by enclosing large regions using monolayer graphene films. Electrochromic devices often exhibit a dramatic drop in coloring efficiency when subjected to repetitive mechanical bending due to the EC layer's weak adherence to the flexible substrate. The EC layer's adhesion to the electrode must be large enough to resist delamination from the electrode, associated with long-term device cycling tests. Thermal treatment is a typical method in rigid ECDs to guarantee the EC film adheres well to the electrodes. Thermal treatment is often omitted when depositing an EC layer on flexible substrates since these delicate structures are unable to withstand high temperatures. Thus, the ability to fabricate stable EC coatings without thermal annealing is particularly appealing.

The interface qualities between electrodes and electrolytes are also important to the effective performance of an ECD. Both the EC and TCEs layers must have high chemical stability while in contact with the polyethylene to guarantee that the switching speed, optical modulation and long-term cycle performance are not degraded, and to prevent layer disintegration or delamination. Usually, the gadget is sealed with an epoxy sealer to prevent electrolyte leakage and to facilitate handling. Blister development and electrolyte cracking during processing are also significant concerns in ECDs that employ solid-state electrolyte.

EC technology has made significant strides in recent years. Foldability, flexibility and stretchability have been added to stiff ECDs to make them more appealing. These characteristics make it enticing for wearable and future technology, and so contribute to the revolution of EC applications toward flexible electronics. The possibilities for flexible ECDs continue to improve as new device architectures, processing approaches and innovative materials are developed. Recently, efforts have been made to fabricate ECDs that contain more intelligent multi-functionalities while keeping configurational stability despite mechanical deformation.