The BrainGate project, an initiative focused on developing brain-computer interface (BCI) technologies to restore communication and mobility to populations with paralysis, has demonstrated an assistive system without the need for wires or cables.

The intracortical wireless BCI with an external wireless transmitter is capable of transmitting brain signals at single-neuron resolution and in full broadband fidelity without physically tethering the user to a decoding system. traditional cables are replaced by a small transmitter weighing a little over 1.5 oz. The unit is 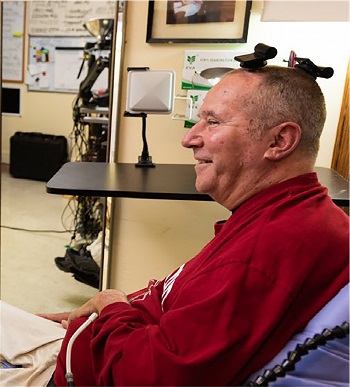 A clinical trial participant uses wireless transmitters instead of cables normally used to transmit signals from sensors inside the brain. Source: BrainGateplaced on top of a user’s head and connects to an electrode array within the brain’s motor cortex using the same port used by wired systems.

The system includes an array of 192 electrodes implanted into the brain's motor cortex, and relays neural signals at 48 megabits per second to the head-worn wireless transmitter.

Research published in IEEE Transactions on Biomedical Engineering describes the successful use of the BCI by two trial participants paralyzed by spinal cord injuries. These subjects were able to use the system in their homes, unencumbered by cables, continuously for up to 24 hours. The trial provided long-duration data, including while participants slept, for the researchers.