Spectrum Instrumentation has released 11 new digitizer products that are specifically intended for the capture and analysis of electronic signals in the DC to 2 MHz frequency range. Offering signal acquisition at rates from 1 kS/s to 5 MS/s, and with 16-bit resolution, the products can be used in almost any application where sensors convert a mechanical property (such as vibration, acceleration, pressure, displacement) to an electrical signal. The 11 digitizers are available in two popular formats: as peripheral component interconnect express (PCIe) cards with two to eight channels and as LXI-Ethernet instruments with four to 48 channels.

The PCIe cards go directly inside a PC, turning it into a powerful data acquisition system or data logger. The four new models of the M2p.591x series are available with two, four or eight channels. It is also possible to connect up to 16 cards together to create larger systems with as many as 128 fully synchronized channels. The LXI- 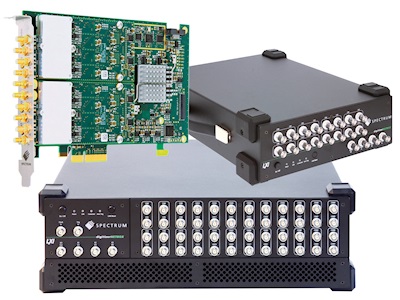 Source: Spectrum Instrumentationbased products are part of the company’s Digitizer Netbox series. They offer similar capabilities to the PCIe cards but connect to a PC or a system network, via a simple Ethernet cable. Two Digitizer Netbox sizes are available. The small DN2.591 products, which provide four, eight or 16 channels, and the larger DN6.591 units, that offer 24, 32, 40 or 48 channels. The compact size of the DN2.591 products allows them to be deployed almost anywhere, even in mobile situations, with an optional 12 V/24 V power supply. The high channel density of the DN6.591 units makes them perfect for situations where multiple signals, such as those coming from arrays of sensors, transducers or antennas, need to be acquired and analyzed.

To ensure the new digitizers can be used in as many applications as possible, the channel inputs offer tremendous versatility. Each has its own 16 bit A DC and a fully programmable amplifier with input ranges between ±200 mV and ±10 V. The capability makes it easy to capture small and large signals alike. All channels have programmable input offset for unipolar measurements, as well as selectable input termination (50 Ohm and 1 MOhm). Whenever required, the digitizers can even be configured in single-ended or differential channel measurement modes.

The digitizers combine on-board calibration, a high precision sampling clock, a low-noise amplifier design, internal digital filtering and averaging on lower sampling rates. This allows them to deliver excellent dynamic performance as demonstrated by the products having a signal-to-noise ratio (SNR) as high as 86 dB and spurious-free-dynamic-range (SFDR) better than 103 dB. Such performance lets users make measurements with confidence and precision.

Large on-board memories (up to 512 MSamples/card) make it possible to capture both fast and slow events, as does a variety of smart triggering capabilities and acquisition modes. Triggering on problem signals like glitches, spikes, bursts or even when specific patterns occur, allows the storage of waveforms into memory in the most efficient way possible. Transient capture, multiple (burst) recording, gated sampling, ABA sampling and data streaming (FIFO) modes are all supported. In FIFO mode, the acquired data can be sent directly to the PC, where it can be processed by the CPU, stored in PC memory or sent to a GPU (PCIe cards only) for data intensive signal processing. The PCIe cards support data streaming at rates up to 700 MB/s while the LXI instruments use Gbit Ethernet to stream at up to 100 MB/s.

All Spectrum digitizers are fully programmable. Users can write their own control programs in almost any popular language including C++, VB.NET, C#, J#, Delphi, Java and Python. Support is also provided for third party software tools like LabVIEW and MATLAB. Alternatively, the user can simply run Spectrum’s own software, SBench 6 Professional. SBench 6 lets users control all the modes and settings of the hardware via a simple and easy-to-use interface. The software has a host of built-in features for data analysis and documentation. These include FFT analysis, XY display, a function interpreter, parameter measurements, data export into ASCII, Wave, MATLAB, comment functions (for annotating signals or displays) and even a simple report and printout function.