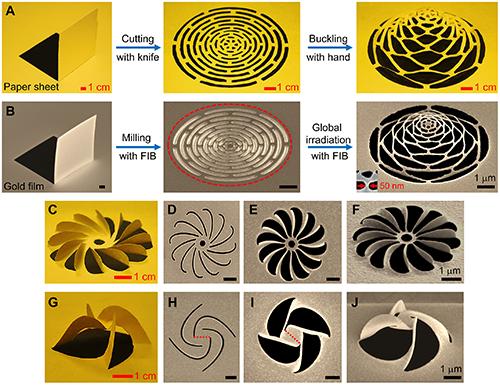 Macroscopic paper cuts in a paper sheet and nano-kirigami in an 80 nm thick gold film. (Source: Institute of Physics)

Kirigami is also called paper cuts or jianzhi. Kirigami involves cutting and folding flat objects into 3D shapes. For nanofabrication, the researchers were inspired by the traditional kirigami design called “pulling flower.” This kirigami method was used with flat films at the nanoscale. A focused-ion-beam (FIB) was used to cut the precise pattern in free-standing gold nanofilm and pull the nanopattern into a 3D shape.

The 3D pinwheel-like structure with giant optical chirality was produced with the kirigami method. The newly produced nanostructure could reach the manipulation of both the “left-handed” and “right-handed” circularly polarized light with strong optical rotation effects. With this, the researchers could demonstrate a multidisciplinary connection between two fields of magnomechanics and nanophotonics.

Nano-kirigami offers researchers and developers a 3D intelligent nanofabrication method that is completely different than the traditional methods, opening new doors for nanofabrication.

The paper on the kirigami nanofabrication method was published in Science Advances.