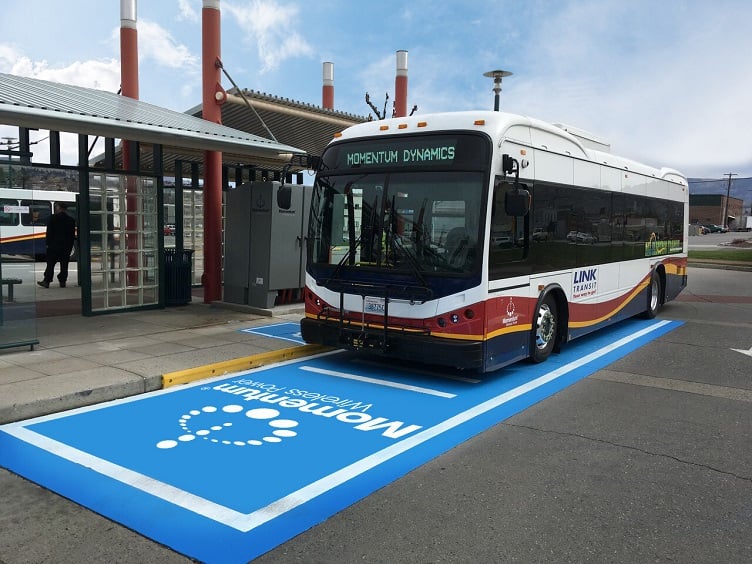 The wireless charging station in Washington that is now operational on buses. Source: Momentum Dynamics

The market for wireless charging of electric vehicles is heating up recently in the automotive space. Last week, Hyundai-Kia completed a project involving a wireless system with no plugs required instead using an electromagnetic field to transfer energy between two coils.

Then earlier this week, Daimler was partnering with charging vendor Hubject to simplify the process of using public recharging stations for drivers of electric vehicles.

Now, Momentum Dynamics Corp., which has been working on inductive charging technologies for the past few years, has commissioned what it claims is the United States’ first 200-kilowatt wireless charging system for battery-electric transit bus fleets.

The wireless charging system is operational now on a BYD K9S bus at Link Transit in Wenatchee, Wash.

"Across the globe, transit agencies are transitioning to electric buses as quickly as they can but driving range limitations are impeding faster adoption," says Andrew Daga, Momentum Dynamics CEO. "These agencies have been waiting for a solution that will guarantee their new electric buses can drive any route while maintaining an adequate energy reserve under all conditions."

Momentum says that the charging system automatically adds enough energy to the bus battery to complete another route during its routine transfer station stops. This process takes only about five minutes allowing the electric bus to drive unlimited route cycles. Buses simply stop over the charging transmitter embedded in the road to charge the vehicle automatically.

In the first month of operation, the system is adding more energy to the bus than it consumes on each driving route, the company says. The plan moving forward is to install additional wireless charging systems in the U.S. this year and more are planned for Europe in 2019. Momentum says its technology is not just limited to commercial vehicles but could also be used for electric cars and autonomous vehicles.