Paul Sickles has been working at the forefront of high-performance, industrial technology his entire career. His experience goes back to the late days of the Lockheed SR-71 program, the F-22 Raptor, and even includes collaborating with several space agencies to develop a hypersonic vehicle material.

Today, Sickles runs his own consulting business, Stream Lion Design LLC, which specializes in applying the latest technologies to help companies solve critical engineering problems. Most recently, Stream Lion relied on 3D printing to solve a challenge for a company operating in the power utilities industry.

Sickles’ client was interested in solving a combustion turbine problem known to be a widespread concern in the industry. There needed to be a way to survey turbines to identify which ones were at highest risk of failure. So, Sickles was called to help solve the problem.

Part of the solution depended on collecting vibration response data from within assembled engines—a process commonly referred to as modal testing. Once collected, the data would be used to show which engines were most susceptible to vibration, so they could then be managed accordingly.

Vibration response data is collected by striking a part with a precision instrument called a modal hammer. The subject part is often instrumented with an accelerometer that sends the resulting vibration measurements to another device called a signal analyzer. Much can be learned about a part’s response to vibration by striking it and measuring its reaction to the impact.

Searching for a Low-Volume Production Solution

There was one problem with this approach—these types of tests are best suited for a laboratory setting, not inside a combustion turbine. The tests required Sickles to physically climb into the engine to perform hundreds of vibration tests. It didn’t take long for him to realize that the modal hammer normally used in the laboratory was not designed for this particular application.

He quickly found it extremely difficult to maneuver the hammer within the engine. He noted, “While going into the turbine engine, it was a pretty cramped environment, there was little to no visibility of the parts during the testing process.” This made it difficult to cleanly strike with the hammer, resulting in poor data.

He was also unable to test the parts quickly enough because the hammer was too cumbersome. “When you’re at a power plant doing this type of work, everything must be done as planned and on a strict timeline,” Sickles explained. “I had to get in and out fast.” 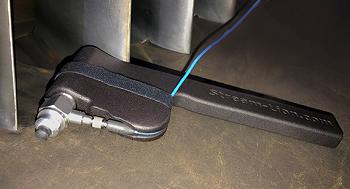 The new modal hammer design is more compact than the commercially available hammer—making it easier to use in a cramped, industrial setting. Source: ProtolabsAfter experiencing the shortcomings of the commercially available hammer, Sickles started envisioning a new modal hammer that could perform better in an industrial environment. So, as any engineer would do, he decided to take measures into his own hands and create a new design. He wanted to improve the hammer’s ergonomics, reduce its size, and incorporate other enhancements to make the data collection process faster and more reliable.

“I looked at the tool to see how I could improve it. I began thinking about changes I could make and then used 3D printing to prototype the device,” said Sickles. “I experimented with different prototypes to validate the new design.”

As he worked through several iterations and the final design came into focus, he began considering how the part would be manufactured. “The new design was such an improvement that I started gaining interest from others wishing to purchase this tool. I was now faced with figuring out how to make the improved hammer available to customers,” he explained.

Sickles outlined several key priorities for the production part as he searched for a suitable manufacturing process. The final part would need to be durable enough to withstand repeated impacts, have tight tolerances to properly interface with force transducer components, and, since he would likely only need a few parts at a time, be economically produced at low volumes.

The first prototypes were built on Stream Lion’s desktop 3D printer, but Sickles knew that durability and overall quality would need to be better for a robust end-use part. This is when he turned to Protolabs.

After discussing the part’s requirements with a Protolabs applications engineer, he weighed the benefits of building the part through selective laser sintering (SLS) or Multi Jet Fusion (MJF), both production-grade 3D printing processes.

Sickles’ final decision was to use MJF due to lower costs, finer feature precision, and the higher quality surface finish compared to SLS. This production-grade 3D printing technology would enable him to build a durable nylon part with precise features that properly fit to other parts in the assembly.

New Design Hits the Nail on the Head

The new hammer design was successful in solving the issues Sickles encountered with the off-the-shelf tool. Not only was it more ergonomic and easy to use, but the 3D-printed part had the strength and durability to last in the field. Sickles states that the new hammer enabled him to double the speed that he could collect data.

“Besides function, it was important that the part had the right surface finish and durability, since this would be used in the field and wasn’t just a prototype,” he said. “Right out of the box, the part was a huge success. The tolerances were exactly what I needed, it fit within the assembly perfectly, and the bead blast and black dye finish looks great while giving the hammer the perfect texture.”

By leveraging Protolabs’ 3D printing service, Sickles can come back to print more hammers as they’re ordered. Additionally, with an on-demand model of production, he has the ability to iterate the design without rendering inventory obsolete.

“This application was an ideal fit for production 3D printing,” Sickles noted. “So often people tend to rely on additive manufacturing for prototyping and then move to molding or machining when they get to production. But for me, 3D printing parts in the exact quantities that I need really makes for an efficient business model."