An Exoskeleton Engineered for Nano-electronics 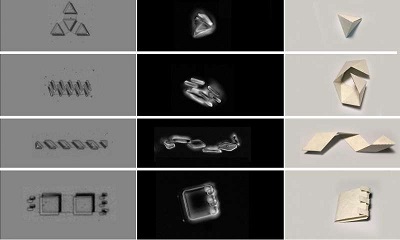 A new platform has been engineered for the construction of micron sized origami machines that change shape in fractions of a second in response to environmental stimuli. Cornell University researchers attached graphene sheets to nanometer thick layers of glass, forming ultrathin actuators that bend in response to small strain differentials.

The combination of materials is the key to the bimorph, enabling the device to bend when driven by a stimulus like heat, a chemical reaction or an applied voltage. When exposed to heat, two materials with different thermal responses expand by different amounts over the same temperature change. The bimorph bends to relieve some of this strain, allowing one layer to stretch out longer than the other.

The graphene-glass bimorphs also fold in response to chemical stimuli by driving large ions into the glass, causing it to expand. Chemical activity typically only occurs on the very outer edge of glass when submerged in water or some other ionic fluid, but as the bimorph is only a few nanometers thick, the glass is basically all outer edge and very reactive.

Atomic layer deposition technology is used to chemically “paint” atomically thin layers of silicon dioxide onto aluminum over a cover slip. A single atomic layer of graphene is then wet-transferred on top of the stack to realize the thinnest bimorph ever made.

One of their machines was described as being “three times larger than a red blood cell and three times smaller than a large neuron” when folded. The researchers say the devices are compatible with semiconductor manufacturing and should help advance robotics development at this scale.

Due to graphene’s relative strength, it can handle the types of loads necessary for electronics applications.

“If you want to build this electronics exoskeleton,” said Paul McEuen, the John A. Newman Professor of Physical Science and director of the Kavli Institute at Cornell for Nanoscale Science, “you need it to be able to produce enough force to carry the electronics. Ours does that.”

For now, these tiniest of tiny machines have no commercial application in electronics, biological sensing or anything else. But the research pushes the science of nanoscale robots forward.

“Right now, there are no ‘muscles’ for small-scale machines,” he said, “so we’re building the small-scale muscles.”