The average age of military aircraft has been estimated at about 30 years, where most of their avionic systems were developed based on a “federated” architecture. In such an architecture, functionality is partitioned among multiple subsystems, such as navigation, communications or radar, which are interconnected through a central command and control network (primarily MIL-STD-1553). Newer avionic systems, however, are based on an “integrated” architecture, in which multiple subsystem functions are hosted on centralized computer resources where a high-speed network (such as Fiber Channel) is used as a backplane connection to various I/Os.

The interconnectivity of the older (legacy) federated architectures with the newer integrated architectures pose numerous technical challenges that must be overcome by avionics system engineers. Among these challenges include (but are not limited to) differences in processor speed, memory and display limitations, I/O and communications bandwidth, and hardware and software availability and compatibility. Improvements to avionic systems can be accomplished through combinations of new hardware and software. For example, the transmission of video, images and other visual information (such as for terrain awareness and mapping as well as weather radar), may require new electronic hardware, however the software must also be modified to accommodate large increases in data quantity and refresh rates that are not available on older less-capable legacy systems.

The need to implement changes in software can become difficult and expensive due in large part to the cost of the verification and validation process of the new software. In some cases, the software must be re-engineered to remove code for obsolete equipment, weapons or tactics. In other cases, software must be re-engineered to add or remove redundancy between two or more subsystems. These software modifications may adversely affect the real-time performance, communications bandwidth and data flow of the entire system. Moreover, as the amount and complexity of software modifications increase, so too does the time and cost required to verify and validate the software. Alternative system architectures, involving both software and hardware modifications are therefore needed to cost-effectively achieve seamless connectivity among these diverse subsystems.

Several options must be carefully considered so that upgrades can be implemented to legacy systems in a manner that ensures maximum flexibility, reliability and robustness while staying within development budget, schedule and resource constraints. This is compounded by the fact that the complexity of modern avionic systems is increasing at a dramatic rate where the amount of software in a modern platform can be tremendous. Upgrades to legacy systems can involve several alternatives, ranked in increasing levels of difficulty and complexity as follows:

1. Upgrades/replacement of the legacy hardware that do not affect the legacy software

2. Modification of the legacy software that does not affect the legacy hardware

3. Adding on new functions and capabilities that require only a small amount of new software or minor modifications of existing software

4. Upgrades/replacement of the legacy hardware that involve only minor modifications to the legacy software

One approach may involve upgrading the system hardware while leaving the legacy software intact. In such cases, it may be possible to redesign one or more circuit cards to provide both a faster version of the processor and more memory. Application specific integrated circuits (ASICs) of field programmable gate arrays (FPGAs) can be used to emulate hardware or software that can execute legacy code with little or no modification. While such an approach may minimize software modifications, additional effort may be required to develop custom ASICs or FPGAs.

A more cost-effective approach might involve “adding-on” a small dedicated processor running a small amount of software for a new function versus making wholesale changes to the centralized integrated modular avionics (IMA) computer that may have millions of lines of code. In this manner, it is possible to isolate the new function from existing functions, which allows the avionics system developer to verify and validate only the small amount of software on the new processor, rather than re-verifying the entire software suite of the entire computing platform. This could result in faster development time, better performance and reliability, and lower development and qualification costs.

IMA systems typically make use of Remote Data Concentrators (RDCs), which aggregate slower speed I/Os (such as discrete sensors, low speed data buses such as ARINC 429, CAN bus, LIN bus, etc.) and place them on the central data bus for use by the IMA computer. This enables a “distributed IMA” system, which could result in reduced development cost since the scope of the locally-hosted software function (in terms of real-time performance, verification/validation costs, etc.) can be isolated from the central processor.

The Data Device Corporation (DDC) Avionics Interface Computers (AICs) are scalable, programmable, and flexible platforms that can be used for a host of applications. They include support for the most commonly used I/O communication interfaces used in aircraft and can be used as a data/protocol converter. This function, which is sometimes called a “bridging” or a “gateway” function, provides the ability to seamlessly pull data off one data network and make it available to another data network (presumably a new function or subsystem that is being added). Additionally, the AIC can be used as a general-purpose computer platform that can utilize the avionics I/Os to host a new function, or they can be used to implement an RDC function that also includes local processing. This enables the option of hosting a software function locally in the RDC as opposed to in the central IMA computer. 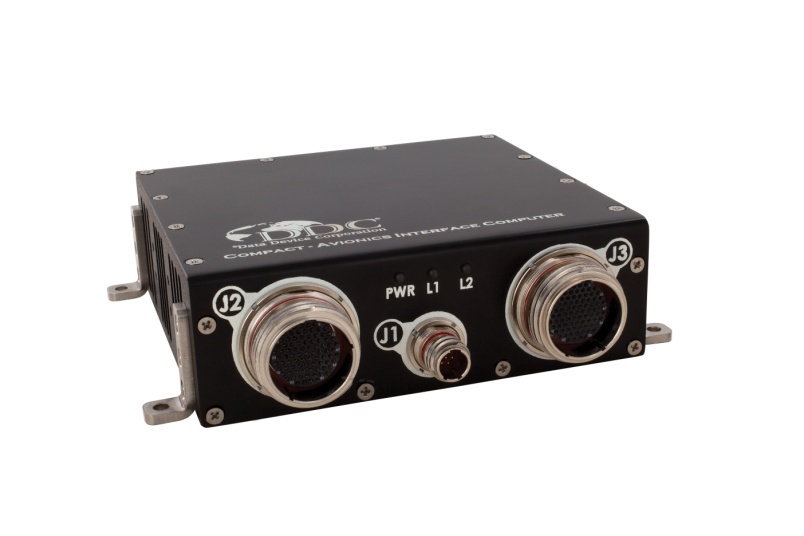 The DDC Compact AIC (C-AIC) offers a completely customizable, off-the-shelf solution, that can be optimized for specific application requirements, and enable faster time to market. An onboard Intel Atom E3845 Quad Core 1.91 GHz processor provides programming flexibility and simplifies connectivity by automatically bridging messages in real-time between Ethernet, ARINC 429, and MIL-STD-1553. The C-AIC is highly expandable, via mPCIe and I/O expansion modules, to support a wide range of I/Os. Applications include: mission interface computer, embedded tester/simulator, and data concentrator.

Data Device Corporation develops and manufactures a wide range of advanced computer architecture platforms that enable multi-I/O capabilities in high-performance avionics solutions. Other products include open standards embedded computing platforms based on Computer-on-Modules (COMs) that provide an ideal modular framework for enhanced design flexibility, and High Density Multi-Protocol XMC and Mini-PCIe modules that give developers the ability to add optimized avionics connectivity in a small form factor, application-ready and rugged enclosure. These systems, together with our AICs, combine best-in-class performance to enable avionics system developers to achieve a seamless integration of the avionics system in a multi-protocol world.