MEMS for the Automotive Industry

Micro-electromechanical systems (MEMS) is a technique used to manufacture miniaturized-mechanical and electro-mechanical components by using semiconductor manufacturing processes such as ion implantation, diffusion, oxidation, sputtering, etc., in combination with specialized micromachining techniques. Both the mechanical parts and the electronics that control them are built from the same piece of silicon. The resulting devices are also called MEMS.

MEMS devices layout varies from a simple structure without moving parts to complex electro-mechanical components having several moving parts controlled by integrated circuits. The size of the devices also varies from less than one micron to several millimeters. The functional elements of the devices are few, consisting of transducers (microsensors and microactuators), another kind of other microstructure, and microelectronics used to control the MEMS. In the last two decades, several types of MEMS sensor have been developed covering all sensing modes, including temperature, pressure, humidity, inertial forces, magnetic fields, radiation, chemical species, etc. These sensors normally exceed the performance of their similar macroscales, and because their fabrication process uses the same batch fabrication techniques used in the semiconductor production, cost per device is much lower that corresponding macrodevice. The combination of low production cost and better efficiency have provided numerous commercial market opportunities. Some pictures of MEMS fabricated at the Sandia National Laboratory are shown here:

A MEMS crankshaft and gear, with a pollen grain. 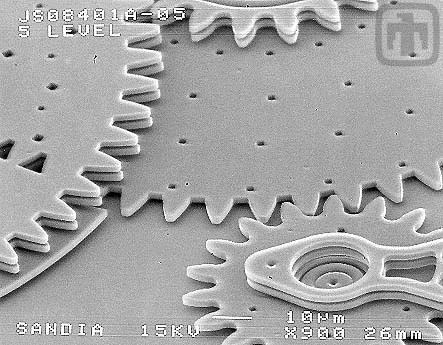 MEMS for the Automotive Industry

Safety, security, low cost, performance, reliability, and comfort for vehicles have made MEMS sensors into must-have devices. Lately, electronics technologies in vehicles have been evolving in quantity and complexity. All these electronics systems rely on the input from sensors, and growing share is manufactured using MEMS technology. Currently, more than 30% of sensors in cars are MEMS. According to a Markets and Markets report (www.marketsandmarkets.com), by the year 2020, MEMS markets for the automotive industry will reach 3.60 billion at a CAGR of 4.7%. In this article, a general classification of MEMS technologies and applications is introduced.

Inertial sensors - in particular, accelerometers and gyroscopes – are gaining market acceptance for matters related to the safety of the passengers. For instance, the use of MEMS accelerometers for the airbag control chip has eliminated the need for the conventional g-switches. An inertial switch is made up of a contact, ball and spring housed in a cylindrical enclosure, and its function is to be an accelerometer that continuously measures the acceleration of the vehicle. If its acceleration exceeds a predefined value, a microcontroller is triggered that computes whether a big change has occurred in the speed of the car. If this is the case, then the airbag opens. Because MEMS accelerometers perform continuous measurements using analog technology, all the g-switches can be replaced by only one MEMS system. This reduces the cost of the airbag systems, making it more affordable for all types of vehicles. G-switches, on the other hand, are made of bulky, discrete components installed in several locations in the vehicle, each one with its own electronic control system. Each one of these units is more than $50, whereas MEMS technology integrates the accelerometers and the electronics onto a single silicon chip, costing just a few dollars.

To detect rollover of skidding (in particular for tall vehicles such as sport vehicles and trucks), MEMS gyroscopes and accelerometers play a vital role. The gyroscope measures the roll rate (along the y-axis). With this parameter, a microcontroller calculates the roll angle. However, roll angle is not enough to determine if the vehicle will roll over. Vertical acceleration must also be read (z-axis) because big roll angles can be found in road curves with no rollover. Finally, the lateral acceleration (y-axis) also needs to be measured. In some vehicles, two accelerometers are needed to measure the acceleration of the y and z axes, but for a dual-axis MEMS, an accelerometer can be used.

A substantial percentage of vehicle crashes in the United States are due to under-pressure tires (according to a U.S. Congress study.) In 2007, Congress passed the tire pressure sensors (TPS) law, mandating that all passenger cars and light trucks be equipped with sensors to read the tire pressure. At the time when the law was enacted, the battery of the vehicle played a vital role in the TPS system, causing battery lifetime to decrease. Since 2012, however, TPS systems have become lighter, less costly, and battery-free thanks to the use of MEMS technology. These new systems are called intelligent tires systems with battery replaced by a vibration energy collector MEMS.

Vehicle Dynamic Control (VDC) is a system that maintains the stability of the vehicle when it starts to skid. The driver does not sense the intervention of the VDC if the system works according to design. A VDC system consists of two accelerometers, a gyroscope and wheel-speed sensors in each tire. The gyroscope continuously measures the turn rate (yaw) of the vehicle, and with the wheel speed read by the sensors, a predicted yaw rate is calculated. Both yaw rates are compared. Also, one of the accelerometers determines if the car is sliding laterally. If the measured yaw rate is not the same as the computed rate, or if lateral sliding is detected, single-wheel braking or torque reduction can be applied to control the vehicle.

The gyroscope and the accelerators are examples of today's MEMS technology. If conventional accelerators and gyroscopes were to be used, the cost of the cars would increase by several thousands of dollars.

To avoid car theft by towing, a tilt detection system is normally included in modern cars. Electrolytic fluid tilt sensors have been used in the past, but they have limitations to the inclination they can detect. MEMS accelerometers are better suited. In the present day, a 3-axis MEMS accelerometer is used to measure the inclination angle with respect to the ground. If the angle exceeds a predefined threshold, the safety systems are activated. The same principle is used to detect wheel theft.

Some other MEMS sensors used in vehicles include the following: