Worldwide sales of semiconductors reached $25.87 billion in August, up 6.4 percent from August 2012, according to the Semiconductor Industry Association (SIA) trade group. It was the sixth straight month of annual growth highest year-over-year growth in any single month since March 2011, according to the SIA.

On a sequential basis, August chip sales were up 1.3 percent from July, the SIA said.

The highest regional growth rate occurred in the Americas, where August sales were up 23.3 percent year-over-year, the SIA said. Year-over-year, semiconductor revenue grew 7.6 percent in Asia-Pacific and 5 percent in Europe, according to the trade group.

However, chip sales in Japan declined 16.4 percent in large part because of the devaluation of the Japanese yen, according to the SIA.

August sales were up compared to July across all regions, according to the SIA.

"Global semiconductor sales have now increased for six consecutive months and the industry is well ahead of last year’s pace, thanks largely to sustained growth in the Americas," said Brian Toohey, SIA president and CEO, in a statement.

Toohey added that robust demand for memory ICs, including flash and DRAM, helped drive the overall semiconductor market in August. However, sales were also up in August among non-memory products, “demonstrating the breadth of the semiconductor market’s strength,” the SIA president said.

Toohey said semiconductor sales have “demonstrated increasing momentum in recent months” because of stabilizing macroeconomic conditions. However, the U.S. government shutdown and the looming debate over the nation’s debt limit “threaten to destabilize the economy and disrupt growth,” Toohey said.

He said Congress and the Obama administration should work together to avoid these “self-inflicted wounds and get America’s fiscal house in order.” 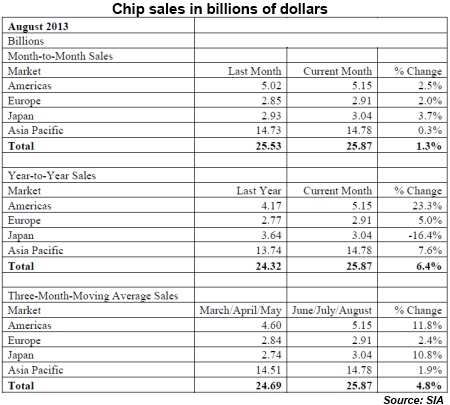