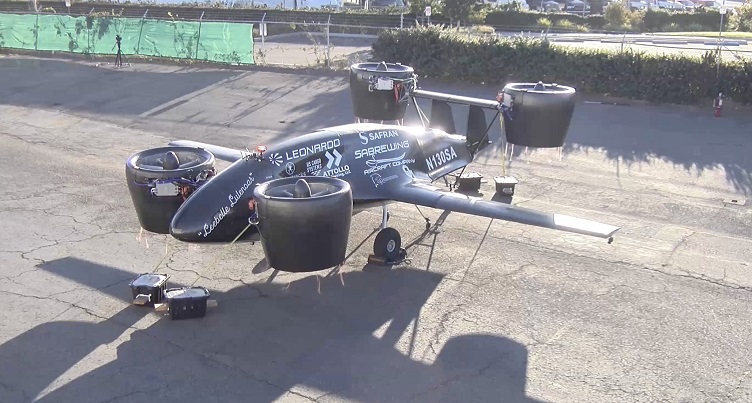 The Rhaegal Alpha drone was able to carry 829 pounds in a “dead-lift” flight that broke the record for cargo flight by drone. Source: Sabrewing

Sabrewing Aircraft Company’s air cargo drone has lifted what it claims is a record-setting payload of 829 lb.

The drone, called RH-1-A Rhaegal, is a vertical takeoff and landing (VTOL) aircraft that hovered to “dead-lift” the cargo. The Rhaegal is claimed to be the world’s first autonomous cargo aircraft capable of both vertical and conventional take-off and is designed to take tons of cargo to any location on Earth, in any weather.

The Rhaegal includes blades, ducts and shapes that allow for 30% more thrust than it was originally designed to provide. The pre-production prototype aircraft weighed about 2,700 lb for the first flight and is capable of a gross weight payload of 3,100 lb. It can fly to altitudes up to 22,000 ft and 200 knots.

When taking off conventionally, the aircraft could carry enough thrust for 2 tons of cargo with the same range, altitude and speed.

“This is only a fraction of what this aircraft can carry,” said Ed De Reyes, chairman and CEO of Sabrewing. “But it proves that we’re able to lift more cargo on our maiden flight than any previous cargo UAV that has ever flown.”

The engine of the Rhaegal uses a turbo-electric drivetrain based on Safran’s Helicopter Engines’ turbine-based motor called the Ariel 2E. The motor can use 50% sustainable aviation fuel (SAF) and turns an electric generator that can produce nearly 1 megawatt of electric energy that powers electric motors in each of the four ducted fans, Sabrewing said.

Sabrewing’s other aircraft, the Rhaegal RG-1-B Bravo, is a production aircraft for first, middle and last mile cargo deliveries.

The Bravo can be operated in any airspace and is capable of a range of missions besides heavy lift cargo such as search and rescue, firefighting, disaster relief, medical deliveries and even fuel and water deliveries.

Additionally, Sabrewing said it is the only cargo UAV that can carry more than 10 different unit load device (ULD) cargo containers and power refrigerated cargo containers both on the ground and in the air.