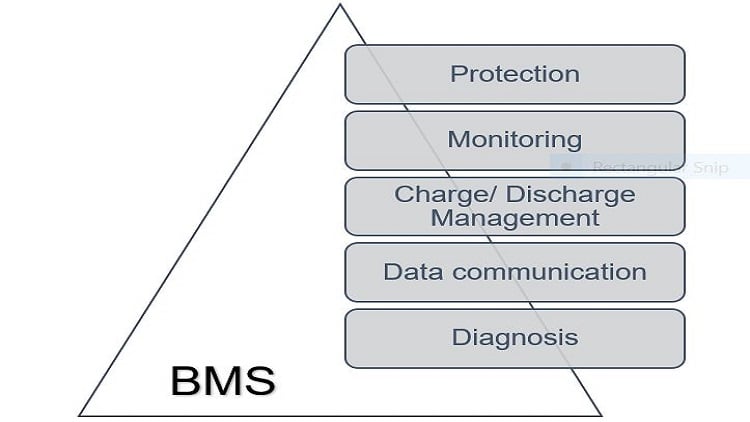 The battery management system (BMS) is a system of integrated electronic components that monitors battery cell parameters and manages them to ensure safe and reliable operation of the overall battery pack. The definition of BMS often varies from one industry to another as the electronics are purpose-built to meet specific industry requirements. For example, in the case of grid-integrated renewable energy systems, BMS can be used to ensure power delivery at a required efficiency and meet technical specifications necessary to meet grid interconnection requirements. In the case of the automobile, the BMS can be used to ensure the safety of battery cells from potential hazards and to perform energy management to improve overall vehicle drive efficiency.

Although some level of management is required for batteries of varying chemistries, the concept of BMS originally stemmed after the emergence of lithium-ion (Li-ion) batteries, which are highly vulnerable to overvoltages and cold temperatures and thus require a BMS as a separate device to ensure safe operation. The selection of a BMS would require careful examination of the industry-specific functional requirements and its topology of architecture.

The BMS functional requirements include incorporating features such as but not limited to cell monitoring, protection, charge/discharge management, data communication and diagnosis. The purpose of these requirements is to protect cells from damage, ensure public safety and maintain cell health to ensure it continues to meet its intended application without performance degradation. 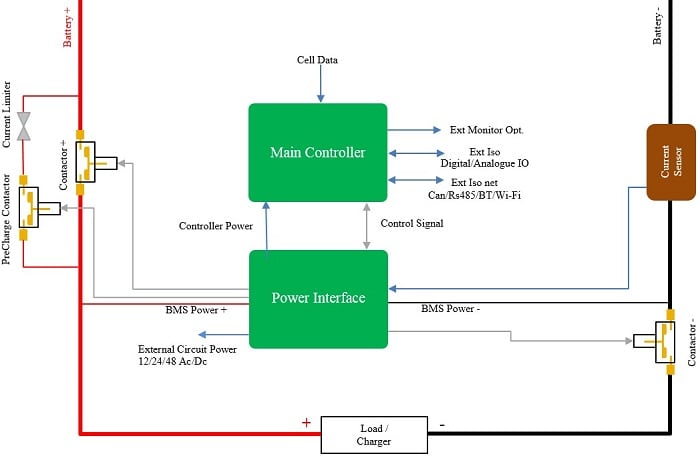 Cell monitoring refers to measuring critical parameters such as current, cell voltage or temperatures to estimate battery state of charge (SoC) and state of health (SoH). The battery SoC defines the level of charge possessed by a battery at any given point of time and is indicative of the available energy that can be retrieved. Similarly, the SoH defines the ability of the battery to store charge at a given SoC relative to a new battery. BMS can collect external data on the cell’s voltage, current and temperatures and use its built-in computational algorithm to diagnose and estimate SoC and SoH.

We know that any batteries irrespective of their cell chemistries have a defined service life and thus can be charged or discharged only a limited number of times. Moreover, for some specific battery types, there are additional considerations that should be made to ensure safe operation. For example, in the case of multiple Li-ion cells connected in series, cell balancing is required to ensure consistent SoC throughout each cell. This is because each cell’s performance characteristics generally differ from each other due to manufacturing deviation and thus its performance degrades at a different rate than other cells in the series chain, causing some to age quickly over time compared to others. By implementing a cell balancing scheme, the weaker cells are compensated by equalizing the charge on all the cells in the chain and thus extending battery life.

Since Li-ion cells are sensitive to voltages, the cell balancing by BMS also ensures the safety of the series chain by avoiding the occurrence of thermal runaways in each cell of the battery pack. Other protection features embedded within the BMS for Li-ion batteries include protection against overvoltage, overcurrent, short circuit, over-discharge and excessively cold or hot temperatures.

Similarly, in the case of lead-acid, the battery's health deteriorates quickly if discharged deeply below a specified level of charge. This is because deep discharging results in a greater accumulation of crystallized sulfur across the plate — a by-product of discharge chemical reaction within lead-acid batteries. To avoid the negative effects of acids build-up at the bottom of cells and accumulation of sulfur across plates, cell equalization is a key requirement. BMS for lead-acid batteries would permit overcharging when cells are fully charged to reverse the effect of sulfur buildup.

The BMS is a system that works in an integrated fashion with other devices such as a battery charger, sensors and the battery pack itself. The topology of BMS could be either centralized, distributed or modular. The centralized topology would include one control unit that is connected to each cell in the battery pack through separate wiring. The centralized topology offers the same protection and control offset levels for all cells in the battery back and thus ensures simple yet robust coordination among cells and a control module. The disadvantage is the presence of wires that transmit from control modules separately to each cell, which increases the risk of short circuits or fire especially in automobile applications where space and weights are constraints.

In the case of distributed topology, there exists a separate slave control unit for each cell with a communication line established between itself and the cell. The topology operates in a master-slave configuration where each slave control unit communicates with the master control unit. The disadvantage of this topology is the added cost, while the advantage is the scalability of hardware as the new cells can be installed and decommissioned from the battery pack. This permits integration with newer like-to-like modules without undergoing massive hardware or software upgrades.

In the case of modular topologies, there exist multiple control modules controlling their group of cells. Among all modules, one of them acts as a master module that controls all the cells in the battery pack, while the other modules act in slave configuration with the purpose just to record the pertinent parameters and communicate to the master module. The advantage of modular BMS is the greater scalability compared to centralized BMS with less use of wires. The disadvantage is the greater effort required to program slave and master control units. Overall, the modular BMS provides a trade of cost and features between a centralized and distributed BMS.

In short, BMS plays a key role in the safe and reliable operation of an energy storage system. Though it is a separate device on its own, its functionality is restricted only when integrated with other subsystems such as battery sensors, battery chargers and any other associated external control mechanisms. The required features and configuration of BMS would depend on the industry-specific requirements, nature of the battery chemistry, and level of reliability and safety that is desired. Ideally, a good BMS design will be the one that provides a good trade-off between the number of features to meet the requirement without compromising the product and people's safety.