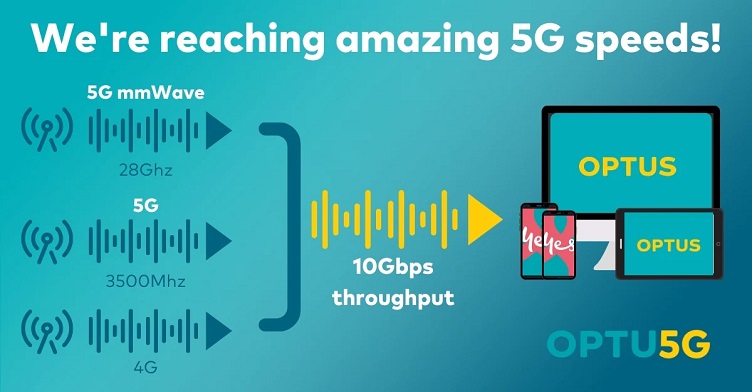 The speed test showed that 5G can deliver fast speeds by boosting the site capacity to 10 Gpbs and beyond. Source: Optus

Nokia has achieved what it claims is record-breaking speed reaching 10 Gpbs during a speed demonstration using 800 MHz on millimeter wave (mmWave) spectrum on Australian telecom Optus’ 5G network in Brisbane.

The speed test was conducted using Nokia’s AirScale Radio and the demonstration shows the potential of 5G across future spectrum bands, Nokia said. Once deployed, the speed and capacity boost from 5G mmWave layer will allow consumers and enterprises to support a range of low-latency, high-bandwidth services including fixed wireless access (FWA), business connectivity and obviously higher download speeds for smartphones.

Nokia said the demonstration of the speed shows the potential of mmWave technology and the benefits of adding it on top of an existing 5G/4G site. The speed test showed that 5G can deliver fast speeds by boosting the site capacity to 10 Gpbs and beyond.

While mmWave is claimed to expand the speeds, bandwidth and lower latency of 5G technology, the connection struggles when traveling through obstacles such as walls, trees or buildings. One way around this challenge is to expand the network through repeaters or base stations that expand the coverage area. Once these challenges are solved, mmWave will allow for the promised 10x speeds of 4G. Currently, most of the 5G deployments are in the sub-6 GHz spectrum where the speeds will be far less than the 10 Gpbs Nokia achieved. However, companies are rapidly deploying mmWave to push the benefits of 5G and generate consumer interest.

For Optus, the mmWave technology will focus on scalability, automation and performance by supporting services that use the full capability of 5G and Optus will explore new use cases for 5G in healthcare, mining, port operations and smart manufacturing. Optus said increased 5G site capacity will ensure that users in densely populated areas or locations will have bandwidth and coverage to meet demand without losing connections. Adding mmWave spectrum layer and increasing the site capacity to 10Gbps has the potential to support about 250 4K video streams per 5G site, Optus said.

The demonstration of mmWave furthers the relationship between Nokia and Optus. In 2019, Optus became the first operator globally to deploy Nokia’s FastMile 5G indoor gateway in a live 5G network. Later, the companies launched 5G services to Optus Stadium in Perth, Australia.