As our society's hunger for data grows, demand for bandwidth is continuously rising. Network capacities are increasing by over 50% every year due to social networking services, big data and new technologies such as artificial intelligence (AI), 5G, machine learning, connected cars and autonomous driverless vehicles. All of these trends fuel the need for not only more data, but also for more data delivered faster.

In response, industry has taken the initiative by developing a standard, designated IEEE 802.3bs and subsequently 802.3cn, for 200 Gigabit Ethernet (GbE) and 400 GbE based on four-level pulse amplitude modulation (PAM4) signaling for new electrical and optical interface specifications. Previously, the per lane technology for 100 GbE used 25 Gbps non-return-to-zero (NRZ) signaling. NRZ is a modulation technique that has two voltage levels to represent logic 0 and logic 1.

Simple, power-efficient and relatively affordable, PAM4 is a modulation scheme built around four levels of pulse amplitude for increased capacity. With obvious benefits, PAM4 has quickly become the more viable solution nowadays adopted by industry for data center connectivity. Its main disadvantage is that PAM4 requires optical dispersion compensation systems on the optical link for reach longer than ~5 kilometers (km) if it falls into conventional C-band wavelengths within a 1550 nm window (far away from zero-dispersion wavelength). This distance translates to over 40 km if operating in term of O-band wavelengths within a 1310 nm window (near zero-dispersion area) with conventional single mode fiber (SMF).

PAM4 needs optical amplification when operating dense wavelength division multiplexing (DWDM) systems with significant multiplex and demultiplex losses added for fiber distances up to 5 km (or more) and dispersion compensation beyond 5 km when operating near 1550 nm with ITU grid wavelengths. Amplification boosts the optical signal in the transceiver so that it can overcome attenuation - increased distance over which the data between two sites can be transmitted without the need to first convert it to an electrical signal. Dispersion is the spreading of light pulses as they travel down a fiber. Tightly packed pulses (high data rates) disperse quickly when propagating in fiber, resulting in distortion of signal quality and loss of information.

While PAM4 requires a relatively sophisticated receiver design, it allows for the doubling of capacity per lane while leveraging existing huge-volume, reliable electro-optical components.

With its high efficiency, 50 Gbps/lane (50 G for short), PAM4 has been adopted by IEEE 802.3 as the encoding technology at the physical layer for 400 GbE, 200 GbE and 50 GbE interfaces. The use of PAM4 requires a slight increase in bandwidth and introduces a signal-to-noise (SNR) loss that requires compensation using forward error correction (FEC).

PAM4 is expected to be the preferred modulation for future serializer/deserializer (SERDES), not higher-order PAM options. The use of PAM8 or PAM16 would require much more power hungry FEC, resulting in high latency and expensive designs that could be hard to be integrated into a single application-specific integrated circuit (ASIC).

An important part of 400 G will be determining whether coherent or direct detection are used for distances of 40 km and 80 km.

At its most basic, coherent optical transmission uses modulation of the amplitude and phase of the light, enabling the transport of considerably more information through a fiber optic cable via DWDM technology. In that regard, it enables long haul links - coherent centum form factor pluggables (CFPs or CFP2s) - that allow transmission distances of more than 1,000 km between sites.

Indeed, coherent technology can enable double or triple bitrates, but requires a pluggable form factor with enough space and enough power to do the job. Why? For one thing, CFP or CFP2 digital coherent optics (DCO) have a high-speed digital signal processing (DSP) chip built in to mitigate dispersion, but does not require separate dispersion compensation modules (DCM).

The DSP is an important component of the coherent application as it runs different correction and optimization algorithms in the digital domain during the optical to electrical conversion. And while this built-in compensation increases the reach between amplification sites, it requires much more processing power and adds extra cost to the component.

Coherent technology is available on different pluggable form factors known as CFP, CFP2, compact CFP4 and OSFP; all are examples of pluggables over 100/200 Gbit/s optical transceivers. OSFP, for example, achieves a data rate of 400 Gbit/s by transmitting 16 quadrature amplitude modulation (QAM) signal beams at ~60 G Baud rate for 80 km and beyond.

On the PAM4 side, more compact and slightly larger than a quad small form-factor pluggable (QSFP) and QSFP28, QSFP-DD (double density) is an evolution of both with an eight-lane electrical interface supporting 12 to 15 W power profiles. In contrast, the OSFP has a larger volume and surface area compared to the QSFP-DD and a higher power dissipation envelope of some 16 to 18 W.

The QSFP28 transceiver, which has become something of a de facto universal form factor for 100 G, is smaller, more cost-effective and consumes less power than its 100 G CFP and CFP2 counterparts. QSFP28 ports are generally designed for a power consumption less than 4 to 5 W. While coherent technology will scale down in footprint and power over time, it will still take many years to meet this target if not impossible at all.

At first blush, it appeared that PAM4 would be best suited only in the less than 40 km range as an alternative to existing, pluggable solutions, but suppliers have demonstrated that it also can play in the 40 to 80 km range as an alternative to optical data center interconnect (DCI)/coherent DWDM solutions in many deployment scenarios. That is because the module meets better price, density and performance expectations of the big users that are now at the forefront driving 400 G.

It should be noted, however, that while a 40 km range is positioned to be the sweet spot for single mode PAM4 applications in terms of cost, reach and power consumption, strong demand will also come from data center operators over what is called the “line side,” which consists of connections of many kilometers looking to connect their data centers to each other.

These connections are typically 80 km to 100 km in length and, as such, coherent systems can be expected to capture this market segment at 400 Gbit/s and higher; the same module can also reach up to 120 km.

The source for transceivers

With a new generation of high-capacity equipment coming to market, Source Photonics, a leading global provider of optical transceivers for datacom and telecom applications, has been providing advanced solutions to support migration to the next higher networking speed. The company’s product demonstrations of its various optical transceivers supporting data rates ranging from 50 G to 400 G over the last few years attests to the readiness of this technology for wide-scale deployment. 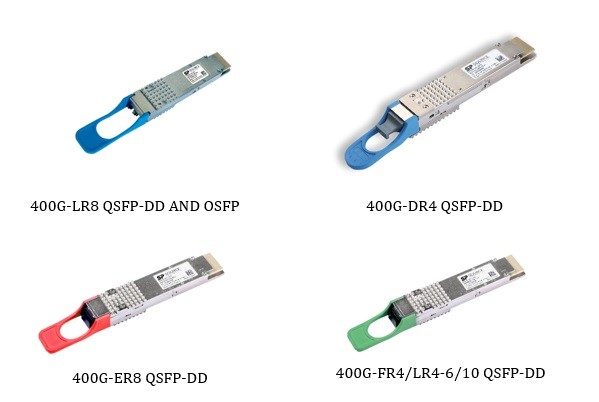 The company is currently shipping its 400 G LR8, 400 G DR4, and 400 G FR4/LR4-6/10 products and is now accepting sample orders for its high-speed 400 G ER8 QSFP-DD which is scheduled to go into production this year. This small form factor module enables the migration to the next higher data rate in a wide field of applications.