Researchers from MIT and the University of Illinois have created a two-legged robotic system, named Little Hermes, that can walk, run, jump and interact with the environment at the same time its human operator executes the same motions. 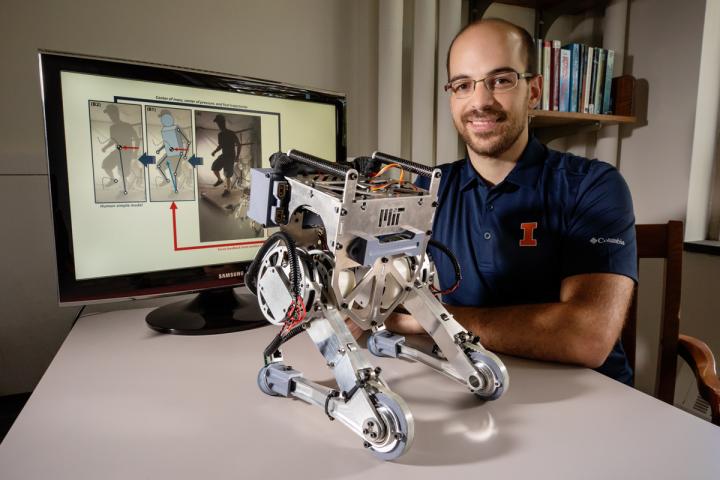 The team was motivated to create Little Hermes after watching the natural disasters and nuclear plant explosion in Fukushima, Japan in 2011. The team thought, if a robot had been able to enter the nuclear plant, the explosion could have been de-escalated before the disaster happened. A human sent into a disaster area can only work as long as it is safe enough to do so. This is very difficult with nuclear disasters because the radiation is dangerous to humans. If a robot was sent into this environment, worries about radiation exposure and danger would be irrelevant. But for a robot to be able to do this, it needs to move in a human-like way.

Most current research into human-operated robotics does not include force-feedback for the operator. When robots are interacting with an environment as a human would, force-feedback is important for the operator. The operator needs to feel the same forces as the robot to operate it correctly. Also, since robots don’t have the same intrinsic sense of balance as humans, the team needed to recreate balance in the robots.

The team still has more developments it would like to make before using this system outside of the laboratory. Right now the teleoperation between the robot and operator happens through wired side-by-side interference. But for Little Hermes to be used in real life, the system needs to be wireless. The team hopes to implement a system similar to those currently used to control drones. The team also wants to develop this kind of device for other parts of the body, like hands and feet. Right now Little Hermes is restrained to bipedal robots, but the team believes that the same technology could be transferred to other mobile systems, like quadrupedal and wheeled robots.

A paper on Little Hermes has been published in Science Robotics.