Robotics vs. Mechatronics: Knowing the Difference 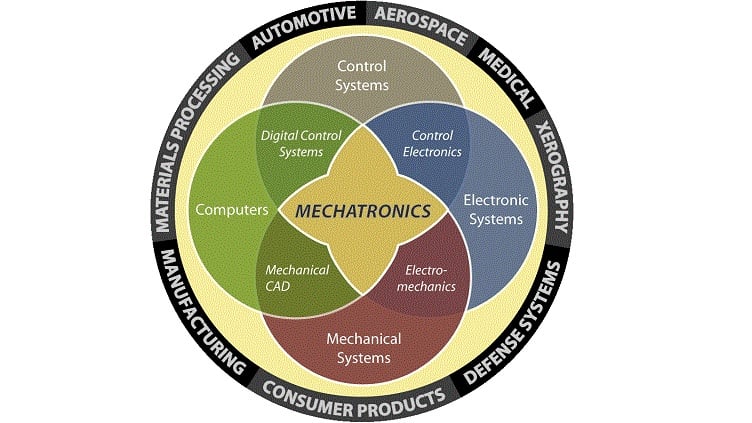 A set of six-axis robots used for welding. | Source: Phasmatisnox

Mechatronics is a superset of robotic technologies. The discipline is a study of interactions between mechanical systems, electrical systems and control theory. It covers a diverse field of electro-mechanical systems, from simple on/off controls to sophisticated robotic systems.

Design. Build. Operate. If this was an introductory study on mechatronics that would be the directive. It is also the directive shaping building automation and manufacturing systems. Mechatronics systems evolve with an emphasis on automation and increased efficiency, and as these systems become autonomous the behavior resembles that of robots. They are constantly performing complex, repetitive tasks without human interaction.

A central heating system is a prime example of evolving mechatronic technologies. Traditionally, a bimetal thermostat operates a heating system, which is not a mechatronics system as it is a thermal-mechanical system that activates a switch point.

However, a digital thermostat with a feedback sensor and microprocessor is a mechatronic system. It is a single device that integrates electrical and mechanical components to complete a repetitive task. Building automation requires more than a digital thermostat. Modern mechatronic systems must address broad requirements, like those needed to support a building automation system (BAS).

Mechtronics is no longer solely the study of mechanical and electrical interactions, but rather the study of electro-mechanical interactions with other technical systems including robotics, electronics, computer engineering, telecommunications engineering, systems engineering and control engineering. French standard NF E 01-010 defines mechatronics as an "approach aim[ed] at the synergistic integration of mechanics, electronics, control theory, and computer science within product design and manufacturing, in order to improve and/or optimize its functionality."

BASs like Johnson Controls's Metasys Building Automation System is a collection of commercial HVAC, lighting, security and protection systems. It is an advanced mechatronic system that incorporates a range of technical systems to maintain a desired climate and lighting scheme. It also integrates with security and protection systems, and functions autonomously based on occupancy schedules and performance criteria, and also features alarm and notification capabilities.

Fully autonomous vehicles are another example of the advanced mechatronics. The term mechatronics has become a modern-day buzzword often used to describe a robotic system. 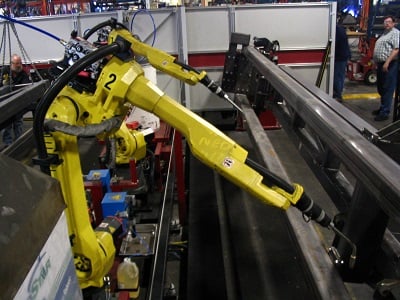 A set of six-axis robots used for welding. Source: PhasmatisnoxMerriam Webster defines robotics as technology dealing with the design, construction and operation of robots in automation, and a robot is a device that automatically performs complicated, often repetitive tasks.

The finite difference between mechatronics and robotics is that robotic systems are re-programmable. By definition fully autonomous vehicles, BASs and smart factories may seem like robotic systems, but they are better described as complex mechatronics.

Robotics is a subfield of mechatronics, as mechatronics includes things that are not entirely robotic in nature. Robotic technologies include Universal Robots collaborative robots and Otto Motors self-driving vehicles.

As the world progresses with an emphasis on efficiency and automation, mechatronic systems will evolve, and the subtle differences between robotics and mechatronics will become even less clear.

Advanced communications, artificial intelligence, machine learning and augmented reality will be increasingly integrated with mechatronics. Some systems are clearly mechatronic by design, yet advanced automated solutions, like fully autonomous automobiles, will beg the question -- is it mechatronics or a robot?